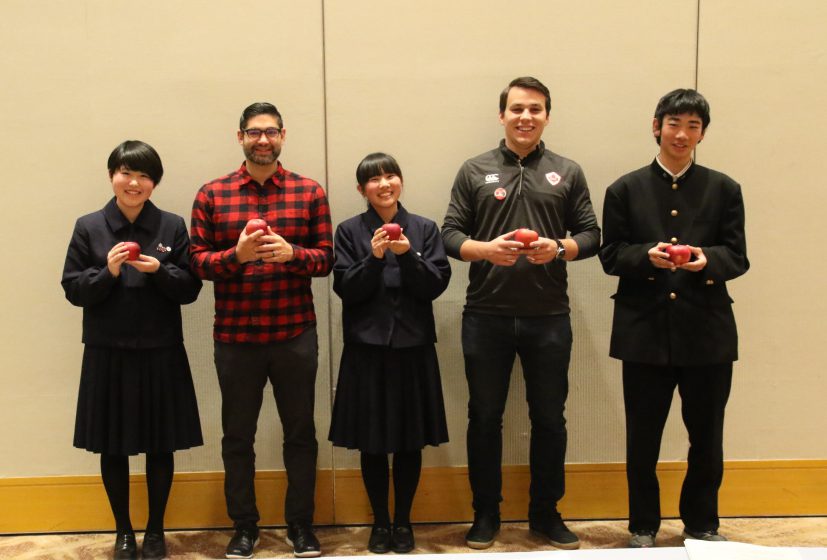 Students in Morioka, northern Japan, to use GAP-foods to show Team Canada that “omotenashi” spirit

Morioka City in Iwate Prefecture, northern Japan, is the designated host town to Canada for the Tokyo 2020 Olympic and Paralympic games. They recently teamed up with Morioka Agricultural High School to form a project team for the GAP-Foods Omotenashi Contest. This contest is being held to showcase recipes that use GAP foods, which are foods that have been cultivated with Good Agricultural Practices (GAP), a series of standards defined by the Food and Agriculture Organization of the United Nations. Morioka Agricultural High School has gained Iwate GAP Foods Certification for its apple production methods, so they were a perfect place to partner with.

The project team proposed a full course meal that uses both Iwate and Canadian foods, with a focus on sweets made with apples. This proposal has now passed the first evaluation stage.

Since passing the first stage, the students have been using these two months to work on making their menu a reality as a way to cheer on Team Canada in the 2020 Olympics, as well as to deepen friendship between Canada and Morioka through food.

Results of the contest will be released on the following site in December. We have great hopes in our high school students’ ideas!

-About the GAP-Foods Omotenashi Contest-

This contest promotes recipes made with GAP foods produced by agricultural high schools all over the country in order to show athletes from our 2020 Tokyo Olympic host towns some of that “omotenashi” hospitable spirit. The contest is organized by the Secretariat of the Headquarters for Tokyo 2020 Olympic and Paralympic Games (within Cabinet Secretariat), and agricultural high schools around the country are working with Japanese host towns to form project teams.

Forty teams made it past the first evaluation stage. Their ideas will be posted on the aforementioned site, where people can vote on their favorite ones.

-About GAP Foods-
GAP stands for Good Agricultural Practices. This is are food production standards that sustainably ensures food safety, environmental safety, and occupational safety. It has been designated one of the standards for food procurement for the 2020 Olympic and Paralympic Games. 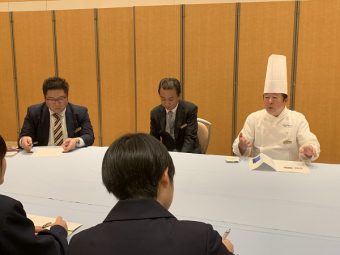 On November 16, 2019 (Sat), Yuiko Kumagai, Yuka Ito, and Yuki Murayama (second-year students at Morioka Agricultural High School) met with Hitoshi Takahashi, head chef at Hotel Metropolitan Morioka, to get some advice on how to prepare apples.

In response to the students’ questions, Takahashi told them how different types of apples will give you different levels of sweetness or sourness. He also taught them how to strike a balance when preparing them with meat or fish, and gave them ideas on how to plate their meals. They learned that the apples they had grown with own two hands were excellent products, and got a better idea of what their recipes would be.

When Team Canada comes for their training camp next year, maybe they’ll be served this “omotenashi” recipe. The students will keep working hard so that these athletes will do well thanks to the power of apples.

-Advice from members of Team Canada- 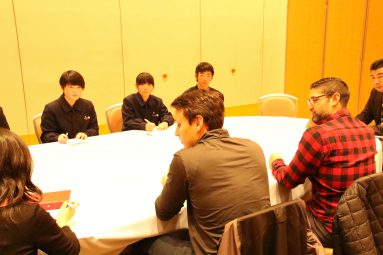 On the same day that these students with with Chef Takahashi, they also had a meeting with two members of Canadian sports organizations: Paul-Henri van Thiel, manager of the Canada national men’s rugby sevens team, and Justin Oliviera, high-performance director of Canada Water Polo. These two were visiting Morioka to scout out how the city was preparing for their training camps to be held in the future.

After the three students from Morioka Agricultural High School introduced themselves in English, they asked about food culture in Canada and if they had special ways to eat apples. Apparently, there were a lot – and most surprising to the Japanese students was the fact that something called apple butter exists. When asked about their favorite Japanese food, both Canadians answered, “sushi.” They both had a lot of interest in trying Japanese cultural activities, which good information to have as the students continue to prepare their “omotenashi” plans.

In a show of thanks to Paul and Justin, the students presented them with 100% apple juice made with the apples they had cultivated themselves. They were very impressed with the students’ work ethic.