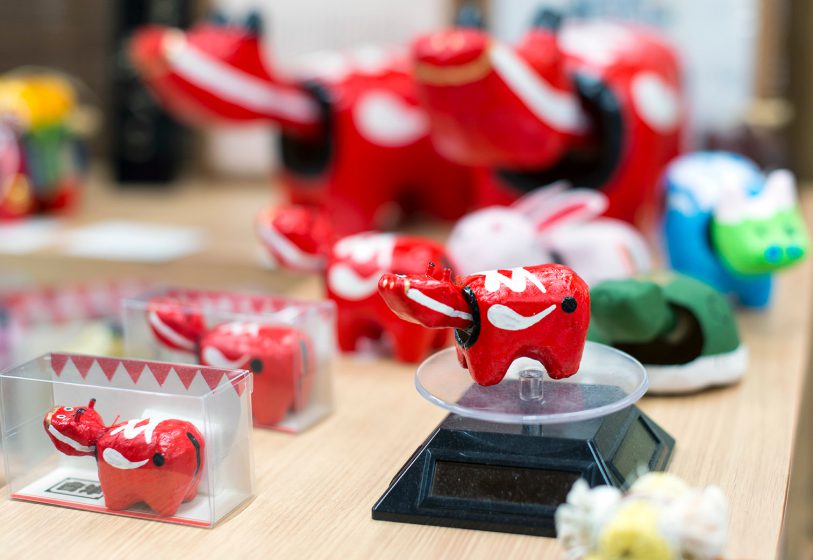 Mieko Arai sits at a worktop inside her family’s shop-cum-atelier, and deftly paints a series of white lines on a red papier-mâché object.

When complete, those marks appear like two crosses, but in fact represent a time-honored emblem known as igeta, itself symbolizing a wooden frame found atop a traditional well.

“Many people don’t know what the marks represent, or even the origins of the objects themselves,” says Arai, as she moves on to painting button-size spots on one of a dozen “akabeko” awaiting her decorative flourishes at Arai Kogeisho, a folk crafts business in Aizu-wakamatsu City.

The wobbly headed akabeko, or “red ox,” is a symbol of the Aizu region of Fukushima Prefecture and has its roots in a red and often round mayoke (amulet) dating back to antiquity that found service in times of disease.

According to Arai, akabeko were developed at least 400 years ago as a talisman for young children. With cows being a familiar sight in the region, the bovine toy would no doubt have been a more endearing protector for children, and its endlessly bobbing head a source of amusement, she said.

The igeta design symbolizes water and purification and the spots represent marks left by smallpox, which struck Japan four times in the seventeenth century alone.

Another traditional emblem, a tomoe, that decorates the flanks of the beko (a colloquialism for “cow”) is also associated with water and, like the color red (“aka” in Japanese), protection against evil, danger, or disease.

Local folklore claims children who were not stricken by disease tended to be those who owned an akabeko.

“Smallpox has been eradicated, but nowadays we are confronted with the spread of coronavirus,” says Arai, who makes akabeko and an array of other traditional papier- mâché toys and masks. “Until a cure is found, I believe the akabeko has a role to play.”

Originally, akabeko were among papier-mâché artifacts crafted by Aizu bushi, or samurai, according to Masaki Osato of the Fukushima Prefectural Museum in Aizu-wakamatsu.

This side business for the warriors of lower rank is believed to have been introduced by Gamo Ujisato, a sixteenth century daimyo and lord of Aizu’s Tsurugajo Castle, who invited artisans from Kyoto to teach samurai traditional crafts to encourage greater self-sufficiency.

“Parts of the history have been added over the years, but akabeko were among papier-mâché folk toys that likely were made during the Edo period (1603–1868),” Osato says. “It’s said that bushi crafted them for cash income.”

A long-held custom in the region was to gift an akabeko at the birth of a child, and while papier-mâché crafts such as akabeko were once widely produced in the Aizu region, today only three makers remain.

Among them is the Arai Kogeisho workshop run by Mieko Arai and her son, Masahiro, and husband, Hiroyasu, whose ancestors were among those samurai who made papier-mâché  and other crafts, Mieko explains.

While no records survive to indicate exactly when akabeko were first produced, theories propose they were part of Aizu’s cultural fabric before the Edo period, their development inspired by an Aizu legend.

According to one version of that tale, when Enzoji Temple in the western Aizu town of Yanaizu was rebuilt after fire more than a millennium ago, workers struggled to transport materials to the clifftop temple from the Tadami River below. Out of nowhere, a herd of cows and horses appeared to help, but upon the temple’s completion only one was left standing: a red ox.

The creature has since become a symbol of fortune able to carry the burden of even the gravest affliction, says Osato.

“This is why some people, especially residents of Yanaizu, insist that the town is the birthplace of akabeko,” he says, adding that Enzoji’s principle Buddhist deity is the guardian deity of cows.

Today, akabeko has itself gained something close to godlike status in Aizu, with oversize versions appearing outside train stations and inside parks and akabeko designs adorning anything from T-shirts to smartphone covers. One of the trains serving the region is named the Akabeko Express. Meanwhile, Yanaizu holds an annual Akabeko Festival. 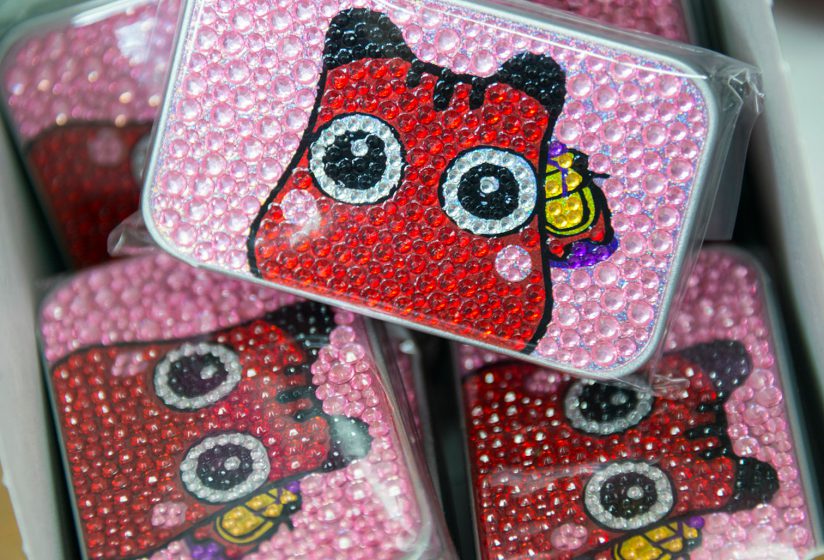 Furthermore, akabeko quickly became a symbol of recovery in Fukushima in the wake of the March 2011 disasters, when earthquakes and tsunami triggered multiple reactor meltdowns at the Fukushima No.1 Nuclear Power Plant, forcing the evacuation of over 160,000 residents, many of them relocated to temporary shelters.

The University of Aizu was one institution that lent its support to those residents, offering a free dispatch education service in the hope it would help motivate evacuees to work hard toward the region’s recovery. They named it the Aizu University Akabeko Program, a nod to the red ox from Aizu folklore whose industriousness is widely seen as representative of the indomitable spirit of the Fukushima people.

Meanwhile another papier-mâché maker in western Aizu, Nozawa Mingei, convened an “Akabeko Project” that toured the devastated Tohoku region of northern Japan and invited people to make their own akabeko.

The idea behind the project was to get residents affected by the disasters, especially children, to think about how to create something from scratch – useful for those who would be charged with rebuilding a region that had suffered widespread decimation.

The Arais are hoping that Aizu’s “lucky ox” will cast its protective powers during the Tokyo Olympics and Paralympics having been selected as one of the Games’ official products, all of which showcase Japan’s wide-ranging traditional crafts.

While the limited edition products feature the akabeko’s characteristic bobbing head and symbolic markings, they have been painted in the colors of the Games – blue for the Olympics and pink for the Paralympics.

All of them are crafted and decorated in the time-honored way, by hand – apart from the official Games logo, which was printed on the toy via something a little more modish: pad printing.

Although the Games have been postponed for one year due to the global spread of coronavirus, Arai says she and her family are taking one positive from the delay: According to the lunar calendar, 2021 is the year of the Ox.

And despite the difficult situation, Arai and her family are continuing to prepare the akabeko in the belief its function is as valid today as it was centuries ago.

“I think making them by hand, no matter how inefficient, is crucial to impart the meaning of akabeko, which, as objects that protect children and bring good fortune, have a personal message to impart,” says Arai, adding this sentiment is even more poignant for the Games.

“Just as our ancestors overcame smallpox, we hope that humankind can overcome coronavirus and that all children around the world will enjoy good health and fortune. That’s what stiffens our resolve to carry on this tradition.”

In late January, 2020, What’s Up Japan visited a workshop in Fukushima Prefecture making the traditional local craft akabeko, and began preparing an article on the history of akabeko as talismans for good health and on how they were chosen as official merchandise for the Tokyo Olympics and Paralympics.
After the delay of the Games was announced on March 24, the workshop was asked for a follow-up comment, which has been added to the article.