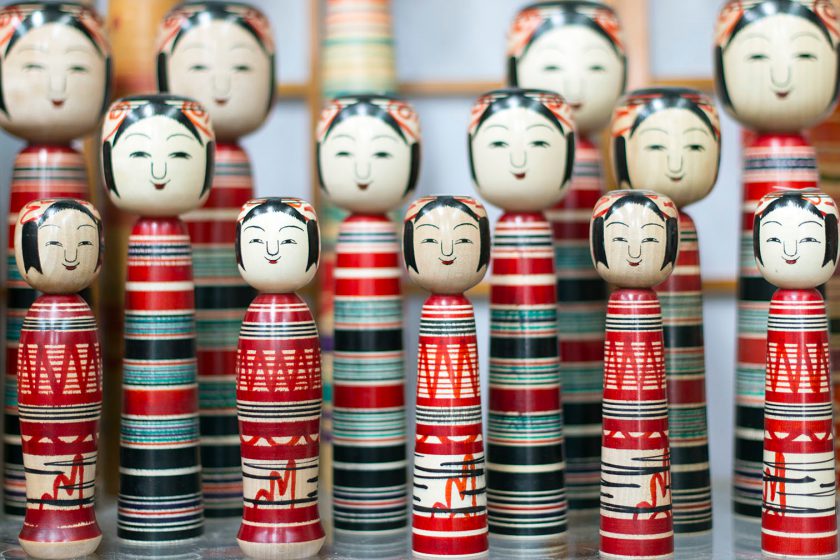 While the name Tsuchiyu has yet to find much global recognition, a cultural aspect of the hot spring resort has in fact been on the world map for some years.

Among the town’s traditional folk crafts is kokeshi, a wooden doll whose minimalist form and colorful designs have been fashioned on lathes by artisans in the Tohoku region of northern Japan for centuries.

Tsuchiyu in Fukushima Prefecture is among the “big three” producers of the dolls, images of which can be found throughout the town on storefront signs, signboards, and other paraphernalia.

Oversized versions appear along the main road and adorn the Arakawa Ohashi bridge, while kokeshi cutout boards stand in front of the town’s main bus stop. Cafes serve kokeshi pudding and kokeshi soda, and one hot spring facility, Otomeyuri, even offers a “kokeshi steam bath,” where guests sit in wooden tubs wearing a poncho with a kokeshi design.

Although the kokeshi’s exact origins are unknown, the doll is believed to date back to Japan’s Edo period (1603–1868) when it served as a toy for baby girls, says Kunitoshi Abe, a sixth-generation kokeshi maker in Tsuchiyu.

“There are numerous theories as to the kokeshi’s roots, but it’s widely accepted that they are a unique feature of this region’s culture,” says Abe, 47, who has been spinning the colorful kokeshi for almost three decades. “As hot spring culture advanced they became popular souvenir items among guests.”

One theory is that they were given to mothers as a substitute for a deceased child, a misunderstanding, says Abe, that resulted from an unfortunate misreading of the name. “Ko” in Japanese can mean “child,” while “keshi” can mean “disappear,” even “kill.”

However, the name “kokeshi” only gained widespread use from around 1940, when a common name for the dolls was being sought, says Abe.

“Until then the doll was known in Tsuchiyu as deku or deko, a (colloquial) word for ‘wooden doll,’ which was one of several variants depending on the place where the dolls were made,” he says.

“In fact, keshi was the name of a much older miniature doll, mostly made from clay, and ko is one way of reading the Chinese character for ‘wood,’ which is how they came up with the new umbrella term,” Abe explains.

A more widely touted theory proposes that kokeshi were based on gosho-ningyo, Kyoto imperial court dolls said to date back over 1,200 years that were originally gifted at times of celebration, such as the birth of a child.

In fact, kokeshi have served a similar function and even today some Tsuchiyu artisans receive orders from couples for a commemorative kokeshi that is the same size as their new-born child, Abe says.

The physical similarities to gosho-ningyo, however, are not easily discernible.

The court dolls typically depict curvaceous, pallid characters. Kokeshi, meanwhile, are little more than an orb fixed atop a thin, tubular base, and the wood from which they are crafted—most commonly wild cherry, dogwood or itaya-kaede (a Japanese maple)—has a warm feel, which is accentuated by the vibrant features painted on top.

Those decorative elements are one of the most intriguing aspects of kokeshi. Subtle design differences not only indicate the place they were made, but also serve as a stamp of individual artisans’ styles, says Abe.

Kokeshi made in Tsuchiyu, Fukushima Prefecture, are instantly recognizable over the other members of Japan’s “big three” production areas – the hot spring resorts of Naruko and Togatta in neighboring Miyagi Prefecture, says Abe, adding that traditional kokeshi are invariably made in hot spring towns.

Among them is the multicolored striped pattern painted on their “body,” which itself tends to be straight or slightly curved near the base.

Naruko’s designs, meanwhile, are known as kiku-moyo (chrysanthemum pattern) or kasane-giku layered chrysanthemums) due to their decorative depictions of that flower, while their bodies usually curve inward at the center.

Facial expressions also vary. While Tsuchiyu artisans paint both eyelids, for example, Naruko’s only include the upper one, Abe explains.

Meanwhile, Tsuchiyu’s seven remaining artisans each leave their own signatory embellishments, which are difficult to discern among the uninitiated. These include delicate variations on the kase, an adornment painted between the hair on the temples and the bangs.

Such local variations have led to a new type of consumer in recent years, says Abe, who often can be found spinning the dolls in time-honored fashion at a foot-powered lathe inside his family’s souvenir store, Matsuya, in central Tsuchiyu. What was once a souvenir item and girl’s toy has now become a popular household ornament and collectors’ item, he says.

Indeed, kokeshi are currently experiencing an unprecedented boom, particularly among young women. Numerous kokeshi events are held throughout the year in the Tohoku region, and at one such event, held in Miyagi last September, dolls made by popular craftsmen sold out in just two hours. Around 70 percent of the customers were young women, some of whom had lined up for a week before the event opening.

And this popularity is not just among Japanese enthusiasts. Following World War II, kokeshi reportedly gained a fanbase among wives of Allied Forces personnel stationed in Japan. Today, too, overseas visitors are among those traveling throughout the Tohoku region to collect kokeshi and countless other items that have been developed from them—including anything from keyrings to t-shirts.

The recent boom began in the aftermath of the 2011 disasters, when many kokeshi makers in the Tohoku region were adversely affected by the quake, tsunami, and nuclear incidents, causing some to close their businesses.

As the region recovered, so too did the artisans, and their stories became the focus of media stories and books, which increased awareness of the region’s “dento” (traditional) kokeshi, as opposed to more recent spinoffs found in other parts of Japan.

Abe is among many in Tsuchiyu who hope the dolls will help instigate a change of fortunes for the town, which has the lowest birthrate in the area, not to mention the highest proportion of elderly residents.

In recent years, the town’s child population has fallen so drastically that its elementary school was closed last year, though another contributory factor was structural damage incurred in 2011.

The town has initiated plans to reverse this trend, some of them aimed at exploiting its status as a kokeshi hub. A new facility called Yumebutai features a kokeshi museum and workshop where visitors can try their hand at decorating the dolls.

Other similar projects are expected to be readied in time for the 2020 Olympics, when Fukushima will host softball and baseball matches.

“Kokeshi are a symbol of childhood, so I hope that their popularity along with the other initiatives in the town will encourage more young families to come here,” Abe says.