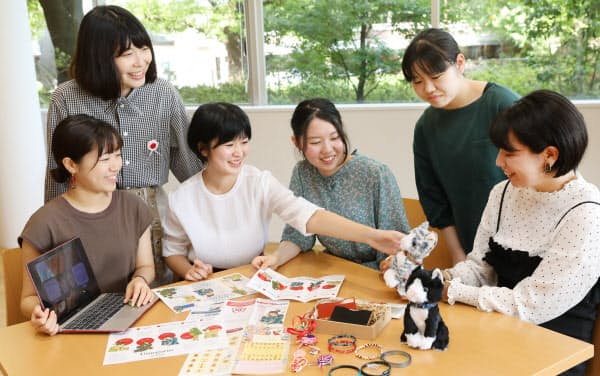 Pierre de Coubertin, the father of the modern Olympics, wanted the Games to encourage young people to be healthy, and lead to mutual understanding and peace. Hosting the Olympics and Paralympics, with people visiting from around the world and various issues that must be dealt with, can be said to be a valuable learning opportunity for the university students of the next generation. Promoting Japanese culture and hosting foreign teams will become the legacy of the 2020 Tokyo Games.

JR Sendagaya Station serves as the “gateway” to both the main venue of the New National Stadium and the Tokyo Metropolitan Gymnasium where table tennis events will be held. Outside the station, a foreign tourist stopped walking. They were looking at a Sendagaya map with locations and venues around the station written in English. The map was made by students at Tsuda University, which has its campus by the station.

“The Games are being held so close to the school. We were exchanging ideas on campus about how we could get involved in some way,” said Ms. Akiko Masuno (20), Student Representative for the “Umegorin Project”. Consisting mainly of students from the first class of the Department of Policy Studies, which opened in April 2017, 160 students are now participating in the project. Applying students’ skills in English and data science, subjects which the school focuses on, the project is being carried out following 16 different themes.

The Umegorin Project has two goals: Contributing to solving issues related to hosting the Olympics and Paralympics, and promoting Japan. With the Department of Policy Studies’ educational mission being to “develop skills to solve the problems of modern society,” it could be considered the perfect fieldwork.

The English map at Sendagaya Station is one example. Until recently, the town was full of people going to work or school, but recently there has been a noticeable increase in the number of foreigners. Ms. Masuno explained, “We asked people around the shopping arcade and station what issues they had. The answer we received was ‘English.’” After being told at the Shogi (Japanese chess) Hall that explaining the rules in English was difficult, the students made an English pamphlet for them explaining the rules. They also made an English menu for an ice cream store.

In a pamphlet for foreigners explaining train manners, such as smartphone use and eating and drinking, the project worked together with an art museum and used ukiyo-e as a motif. Ms. Marina Taki (21), who worked on this project, commented, “We thought hard on how we could catch the interest of people from overseas.” The students are also working on developing an SNS chatbot that will automatically link people who lost items with people who have found them.


Next summer, even more people will visit the area around Sendagaya than this year. There are plans being made to hold events on the Tsuda University campus during the Olympics and Paralympics that will enable visitors to experience Japanese culture.

“Wanting to promote areas outside of Tokyo as well”, the Umegorin Project is also putting efforts into promoting the attractions of other areas. They are collaborating with the city of Sabae in Fukui, known for its production of eyeglass frames and lacquer, and selling products developed by students. There are also plans underway to demonstrate making mizuhiki (Japanese paper art), a specialty of Iida city, Nagano, and sell it.

Professor Noboru Sonehara (65) of the Department of Policy Studies, who provides guidance to Ms. Masuno and the other students, commented, “There is meaning in the students taking a leading role in the project.” The legacy of the Olympics and Paralympics is using the Games as a catalyst to change the values and structures of society. This could be a challenging opportunity for the students as well.

Ahead of the Tokyo Games, athletes from around the world will be holding training camps throughout Japan. Universities, which have both training facilities and accommodations, are an excellent location for athletes to train. Universities hosting these camps has also begun to provide students with more opportunities to engage in international exchange with the athletes.


Mid-July. At the Waseda University Tokorozawa Campus (in Tokorozawa City, Saitama), the Italian swim team was practicing for the upcoming World Aquatics Championships in South Korea. This doubled as an inspection of the facilities they would be using again for their pre-Games camp next year. The athletes tried out the swimming pool and training room, seeing how the facilities were.


In addition to being in a foreign country, the team was also not used to the large campus. The student group “ViVaseda” acted as volunteers, along with local residents. “The pool is this way.” “I will bring you something to drink.” The volunteers provided support for nine days, ensuring the team had a pleasant stay.

From July 10 to August 4 next year, Waseda University, together with Tokorozawa City, will be providing some of the Tokorozawa Campus facilities to the Italian team to use for their training camp ahead of the Tokyo Games. The swimming, athletics, and fencing teams will be holding their camps there, for a total of about 200 people. In addition to the variety of facilities available, its location on the outskirts of Tokyo “might have made it seem appealing, as a quiet environment where the athletes could focus,” according to a member of the Waseda University Olympic and Paralympic Project Promotion Section.

In order to take advantage of this opportunity to increase excitement in the school for the Games, the Olympic and Paralympic Project Promotion Section planned ViVaseda, which started activities in April this year. Currently, around 100 students are members. In addition to preparations for volunteering next summer, the group has also been involved in a variety of other activities such as developing Italian dishes for the cafeteria menu.

Third-year student Ms. Yuna Yamagata, leader of the group’s volunteer section, commented that with their activities, “It is not enough just for us to enjoy ourselves. I understand now that we have to think of the athletes first.” Saying she volunteered for the Games next summer as well, she stated excitedly, “I want to provide hospitality that will make people around the world impressed with Japan.”

The university hopes that these activities will create a legacy of the Games within the school. A member of the Olympic and Paralympic Project Promotion Section commented, “University students have almost no opportunities to be involved in the Tokyo Olympics and Paralympics, aside from as spectators or volunteers. Having them use these opportunities to engage in international exchange should lead to future growth.”

In addition to Waseda, other universities in the Kanto region and around Japan are hosting pre-Games camps by overseas teams. In 2017, it was announced that Rikkyo University, along with Saitama Prefecture and Niiza City, would provide training camp facilities to the Brazilian team. So far, the athletics, karate, and open-water swimming teams have held training camps there.

The approximately 50 members of the Rikkyo University Olympics and Paralympics Support Club made a map in Portuguese for the Brazilian athletes, as well as preparing drinks and cleaning up the facilities. Rikkyo University also provides students who request it with information on volunteering, helping create opportunities for international exchange.

Collaborating with Ibaraki Prefecture and Tsukuba City, the University of Tsukuba is hosting the pre-Games camp for the Swiss team for five events, including judo. The university plans to advertise for support staff within the campus for when the camp is held next summer. The plan is to find around 60 people, particularly students with good language skills. Keio University is working with the cities of Yokohama and Kawasaki to host the Great Britain team. In addition to providing support for the athletes’ training, they will be holding events  introducing British culture.

The original Japanese article was carried on The Nikkei on October 9, 2019. Foreign Press Center Japan is responsible for the English translation. This article may not be distributed, reproduced, or publicly released without the permission of its copyright holders.