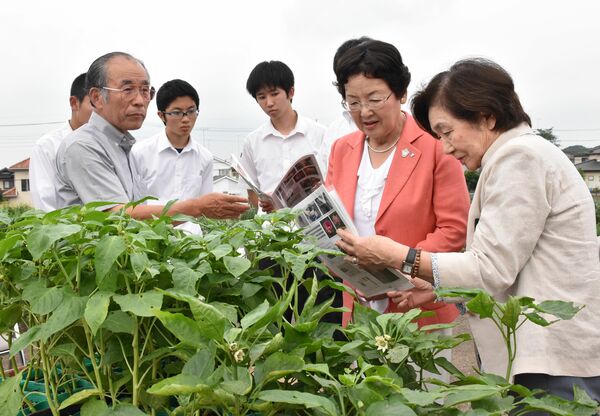 Tochigi—In order to increase awareness of Hungary among the residents of Tochigi City, which has been registered as a host town for Hungary during the 2020 Tokyo Olympics and Paralympics, Tochigi Agricultural High School and the Tochigi City International Center have begun cultivating Hungarian peppers. The peppers they grow will be served to the athletes from the Hungarian team when they come to Japan. On July 2, Mr. Yozo Innami (69), Secretary-General of the Utsunomiya Castle Ruins Lotus Pond Restoration Exploratory Committee, who has ties to Hungary, visited Tochigi Agricultural High School and provided a gift of 120 pepper seedlings to the city.

Tochigi City is working to be selected as the site for the Hungarian Olympic team’s training camp. The host town framework allows cities to engage in exchange with other countries before and after the Games. Along with Tochigi City, Oyama City was also registered as a host town for Hungary last month.

Peppers are a key ingredient in Hungarian cuisine, used in stews or made into paprika powder for use as a spice. Mr. Innami has engaged in exchange with Hungary through efforts such as exchanging lotus and pepper seeds, and when he heard the news about Tochigi City’s relationship with Hungary he proposed growing peppers and serving them to the athletes.

Mr. Innami grew the seedlings he donated using Hungarian seeds. They will be cultivated as of this month, and will begin being ready to harvest in August. The school is planning on looking into processing them into paste and powder as well.

Tochigi City is currently involved in discussions to have the Hungarian athletes carry out a training camp in the city this fall. When the athletes visit the city, they will be provided with hospitality in the form of cuisine using the peppers.

Mr. Innami, after donating the seedlings to Mayor Hideko Okawa, commented, “I hope these become an ingredient beloved by the city.” Mayor Okawa stated, “When I told the Hungarian ambassador to Japan about it, he said he was looking forward to them. I would like to grow these peppers carefully and serve them to the athletes,” and the school’s principal, Mr. Yoichi Makishima (57), said, “We will put our all into growing them.”

The original Japanese article was carried on The Shimotsuke Shimbun on July 3, 2019. Foreign Press Center Japan is responsible for the English translation. This article may not be distributed, reproduced, or publicly released without the permission of its copyright holders.