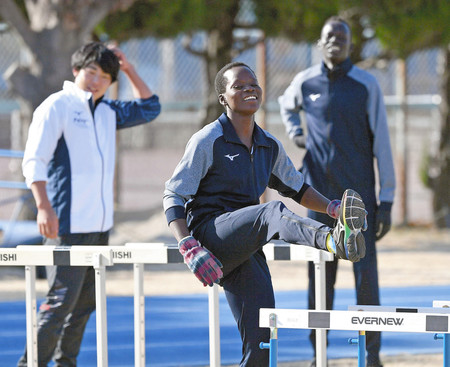 Only six months are left until the start of the Tokyo Olympics as of January 24. In the 478 host towns around Japan which are hosting training camps and international exchange programs, preparations to welcome their foreign guests are ramping up. In the city of Maebashi, Gunma, athletes from war-torn South Sudan came to Japan in November 2019, with aid from Maebashi and other sources, and have been bonding with local residents.

The strong Akagi-oroshi winds blow through Oyama Sports Park in Maebashi. Four South Sudanese athletics athletes, including a Paralympian, are helped in their training every day by different local athletes and volunteers.

When they are not training, the athletes visit local schools and participate in events such as mochitsuki (pounding rice cakes). Mr. Abraham Guem (20), a 1500-meter runner, stated, “The people of Maebashi are truly kind. I would like to show my gratitude by performing well at the Olympics.”

South Sudan gained its independence in 2011, but since then approximately 400,000 people have died in civil war. Around four million people have been displaced due to the conflict, both internally and as refugees in other countries. Having heard of this situation, in which athletes cannot train or even eat to their satisfaction, Maebashi’s municipal government decided to host this unusually long training camp. The athletes’ costs of 20 million yen are being covered by donations, with sponsor companies providing clothing and equipment.

400-meter runner Mr. Joseph Akoon (17) is being couched by Mr. Mizuki Obuchi (22), who came in second place in the 400 meter at last year’s Japan Track & Field National Championships. While aiming to compete in the Olympics himself, he agreed to coach for free as he “wanted to contribute to society.”

Mr. Akoon, who just ran as hard as he could when he first came to Japan, improved his form and with it, his times. Mr. Obuchi, who had difficulties improving while in university and considered quitting running, commented, “They all smile even during difficult practice. They helped me remind me that running is fun.” Although it may be uncertain if he will be able to compete in these Olympics, he has not given up on his dream of “meeting with everyone at the National Stadium.”

Ms. Emi Hirasawa (18), a local high school student, runs alongside Ms. Lucia Moris (18), the only woman among the South Sudanese athletes. When Ms. Hirasawa, a member of her school track club, was watching practice one day, the team invited her to practice together with them.

After become friends with Ms. Moris, who is the same age as her, Ms. Hirasawa researched the history of South Sudan. “It pained me to learn that many children died in the civil war. Lucia also seems lonely as she cannot see her parents.” The two send each other simple texts on their smartphones, such as “This hamburger steak is delicious.” Smiling, Ms. Moris commented, “Emi being there for me is reassuring.”

The majority of training camps at host towns throughout Japan will start in July. Mr. Yasushi Takashima (70), a Maebashi resident who acts as a volunteer interpreter for the South Sudan team, explained, “Learning about the culture and history of another country is fun. I hope other local governments engage in international exchange as well.”

The original Japanese article was carried on TOKYO Web on January 24, 2020. Foreign Press Center Japan is responsible for the English translation. This article may not be distributed, reproduced, or publicly released without the permission of its copyright holders.