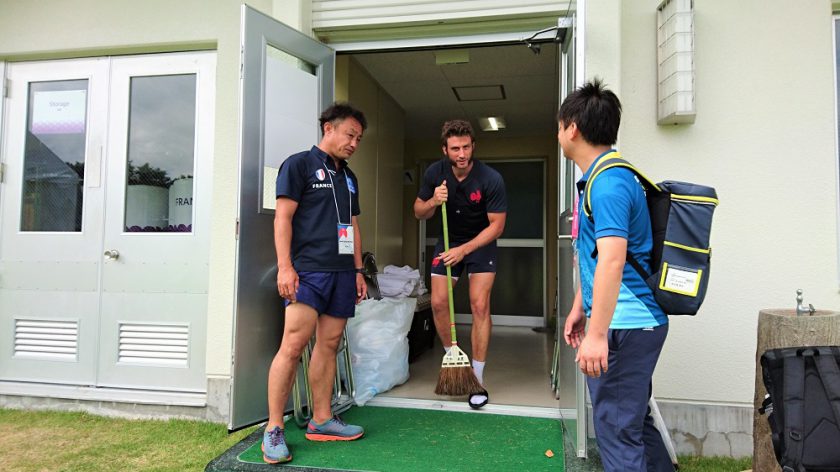 Fujiyoshida City was registered as the Olympic Host Town for France in June 2016 and has worked toward preparations for the French National Rugby Sevens’ pre-training camp leading up to the 2020 Tokyo Olympic Games. (See the 8 part series detailing the various efforts here.)

In this post, we have included an additional anecdote from our time hosting the French National team during the 2019 Rugby World Cup.

【The French National Team Tidies Up】 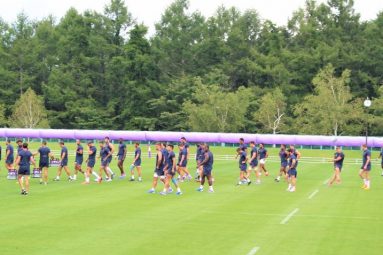 Prior to the team’s arrival, meticulous plans and schedules were created accounting for the amount of time that it would take to clean up after the team following their various practices and team meetings. However, once the team arrived, it quickly became clear that a cleanup effort by staff would be largely unnecessary as the players themselves took initiative in cleaning up their shared spaces following group gatherings and training sessions.

As hosts, we were stunned by how considerate the athletes were in adjusting to Japanese customs particularly in regards to recycling. While we’re certain that all teams were proactive in cleaning up after themselves, we were struck by the level of attentiveness. From conserving water by consolidating unfinished bottles to removing labels and disposing separately, these small efforts were truly a surprise.

We were particularly struck by the athletes taking brooms in their hands and sweeping down their locker room, shower and toilets. When the staff would offer to clean, the players would reply that it was their obligation to clean up after themselves.

This was not a unique occurrence, but something that we saw throughout the Team Camp from beginning to end. We were deeply moved and impressed by the world renowned team’s professional attitude of “taking care of what needs to be taken care of” both on and off of the pitch.

Even following their departure, the respectable actions of the French national team not only at their training grounds but also at their match venues was picked up by the media and came to be widely recognized and applauded.

We are extremely grateful to the players and staff for using our facilities with such respect. One player, Maxime Medard, in particular took special care in sweeping the venue from wall to wall prior to the team’s departure. In conversation he mentioned that he believed that it was incredibly important for senior members of the team to take leadership in this way. His actions and sentiment affected the staff deeply. 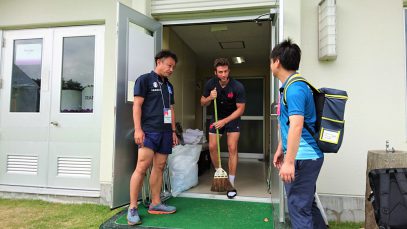 The experience of hosting the French National Team proved to be a tremendous asset in many ways. After having witnessed the actions of the French national team, we felt even more excited to host again during the Tokyo Olympics.

Although the Tokyo Olympics were postponed until 2021, we continue preparing for the team with great anticipation.