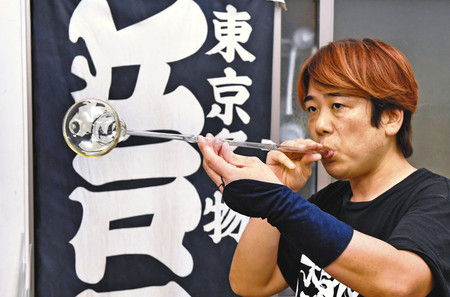 The Edo furin (wind chimes) made by Shinohara Furin Honpo (Minami Shinozakimachi, Edogawa Ward, Tokyo), founded in 1915, have been chosen as an official licensed Tokyo 2020 product. The “Furin: Tokyo 2020 Olympic Emblem” design includes goldfish with the same five colors as the Olympic rings: blue, yellow, black, green, and red. Ms. Emi Shinohara (64), who made the design, commented, “I would like people around the world to experience this aspect of Japan’s culture, enjoying the wind as sound.”

The furin are made using a free-blowing technique called chufuki, blowing hot melted glass using a pipe around one meter in length, and painting the inside of the glass by hand. These furin, made using this method which is over three hundred years old, were first named Edo furin by the second-generation owner of Shinohara Furin Honpo, Mr. Yoshiharu Shinohara (94).

As they are all handmade, even though they appear to be the same shape at first glance, there are subtle differences in the sounds they make. The opening at the bottom of the furin is made by cutting the glass by hand, making the cut uneven, and so the glass tongue which the strip of paper is attached to makes a uniquely pleasing sound when rubbing against the opening.

For the official licensed products, the glass part has a diameter of about eight centimeters, and the strip of paper has the official emblem on it. Speaking about the design for the glass part, Ms. Shinohara stated, “Goldfish, which Japanese people like, and the five colors of the Olympic rings came to mind.” If looked at from the right angle, the positions of the five goldfish on the furin overlap like the Olympic rings. The blue line, representing water, helps the furin seem to have a cooling effect.

President Hideo Mimura (69) of Meister Promotion (Edogawa Ward), which helped with making Edo furin into an official licensed product and is involved in a project to promote sales of Edogawa specialty products, explained, “It is an honor to have this opportunity with the Olympics to demonstrate to the world the traditional craftsmanship of Edogawa.”

Since March this year, the Tokyo Organising Committee of the Olympic and Paralympic Games has been selling 54 products made with traditional craftsmanship from 16 prefectures, including Tokyo and Fukushima, as official licensed products through its online shop and other methods. The furin cost 5,891 yen each (tax included).

The original Japanese article was carried on TOKYO Web on August 12, 2019. Foreign Press Center Japan is responsible for the English translation. This article may not be distributed, reproduced, or publicly released without the permission of its copyright holders.