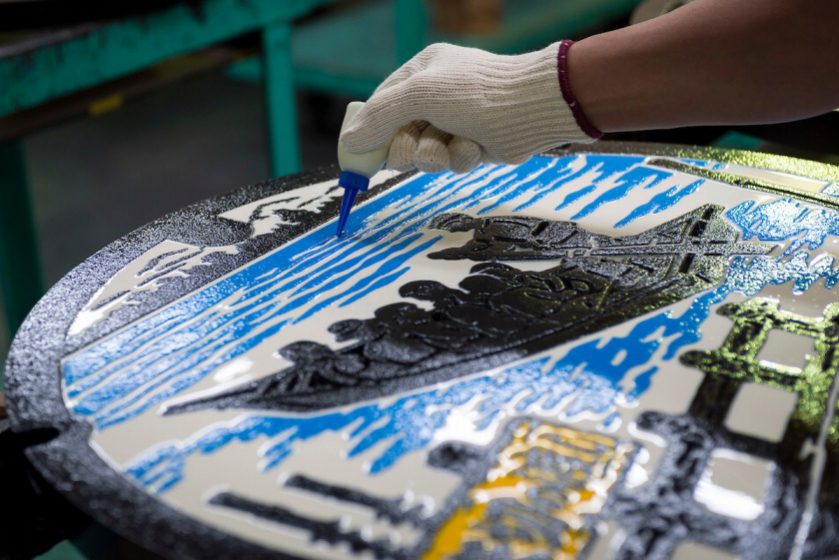 1964 Tokyo Olympic cauldron made in “the foundry town” of Kawaguchi

In October, residents gathered in front of Kawaguchi Station to welcome home a long-lost friend.

To great ceremony, the 2.1-meter-high, 4-ton seikadai (Olympic cauldron), was reignited and reunited with its place of birth for the first time in 61 years.

The cauldron had burned brightly during the 1964 Tokyo Olympics, blazing a trail at an event that emphatically announced Japan’s arrival on the international stage.

It started life on the foundry floors of Kawaguchi, whose metal casting industry is believed to date back to the Edo period (1603–1868), forging ahead thanks to an abundant supply of suitable sand in the city’s Arakawa River.

“It’s like a little piece of history coming home,” says local resident Ken Hosoi as he looks at the cauldron, which remained inside Tokyo’s National Stadium until its dismantling in 2015, followed by a stint as a temporary exhibit at several regional cities. “I hear many buildings in the station area used to be foundries, of which there were considerably more than there are in the city today.”

Until as recently as the late 1940s the city in Saitama Prefecture, just northeast of Tokyo, was home to some 700 foundries, earning it the moniker “foundry town,” according to Takayuki Kumakura of the Kawaguchi Foundry Industry Cooperative.

“(During the industry’s heyday) They made a variety of products, from pots and pans, streetlights and school gates to auto parts, printing presses and cogs for cranes,” explains Kumakura, whose cooperative was established in 1905. “It’s said that in those days some 70 percent of residents used to work in the industry – my father and grandfather included.”

The industry has been in decline, particularly since 2000, when foundry numbers fell below 200 for the first time since 1912. The city has been losing production to Asian neighbors such as China, but also losing clients, such as automakers, to new domestic production centers, Kumakura says.

While output once totaled over 30,000 tons a month, it has now declined to one-fourth that amount, he adds.

Presently there are 50 companies in operation in Kawaguchi, 60 percent of them making cast iron products, mostly by hand and predominantly consisting of “invisible” machinery parts, Kumakura says.

Among them is Nagashima Foundry Co., which is known for producing something that in recent years has become a far more conspicuous product. Since 1945, Nagashima has been manufacturing manhole covers, which over the years have evolved from a functional byproduct of urban life to veritable objects of public art.

The company turns out some 40,000 manhole covers a year, many of them for municipalities looking to add a bit of color to their streets. Much of the production process today is automated, including the carving of the designs using digital data and the pouring of molten iron into the molds.

One step that continues to be conducted by hand, however, is the application of colorful resins, which embellish designs that invariably depict something particularly emblematic of a locale, such as local beauty spots.

Decorating the covers started in the 1980s as a way to brighten up a “dark” image of the underground water and sewage system, which seemed unfair considering the vital function to society it performs, says Yuko Nagashima, senior vice-president of Nagashima Foundry.

“Most designs reflect flowers, birds or other established emblems, or something that succinctly encapsulates a locale,” she explains, adding that computer graphics have helped realize more intricate designs, including manga characters associated with the target area. “Often just by looking at a place’s manhole cover you can tell what it’s best known for.”

While Nagashima’s headquarters are in Kawaguchi, its factory is located in nearby Kuki City, reflecting a trend over the past 50 years for foundries to move away from central Kawaguchi, says foundry cooperative official Kumakura. Apartment blocks have taken their place and the city has become a sought-after home for people from far and wide who work in central Tokyo, which is a comfortable commuter-train ride away, he adds.

A downside is that fewer residents are employed in the industry and awareness of the city’s industrial past has diminished, aggravating the decline of its foundry industry.

However, some enterprising companies have branched out to develop new designer homeware products, including chic table-top grills and lightweight cooking ware under the local chamber of commerce-certified “Kawaguchi i-mono” label – “i-mono” being a play on words that could mean “good products” or “cast metal goods.”

In an attempt to breathe life into the industry, the city convened an annual Kawaguchi Produces Fair in 2015, while presentations at local schools are among efforts to redress the awareness issue.

The city’s governor, Nobuo Okunoki, even made an audacious appeal to the government to reuse the old cauldron during the Tokyo 2020 Olympics, or contracting the city’s foundries to build a new one.

To date, those calls have fallen on deaf ears, though the old cauldron will be given a new home next March when it will be moved from Kawaguchi Station to the spanking new National Stadium in readiness for the opening of the 2020 Summer Olympics.