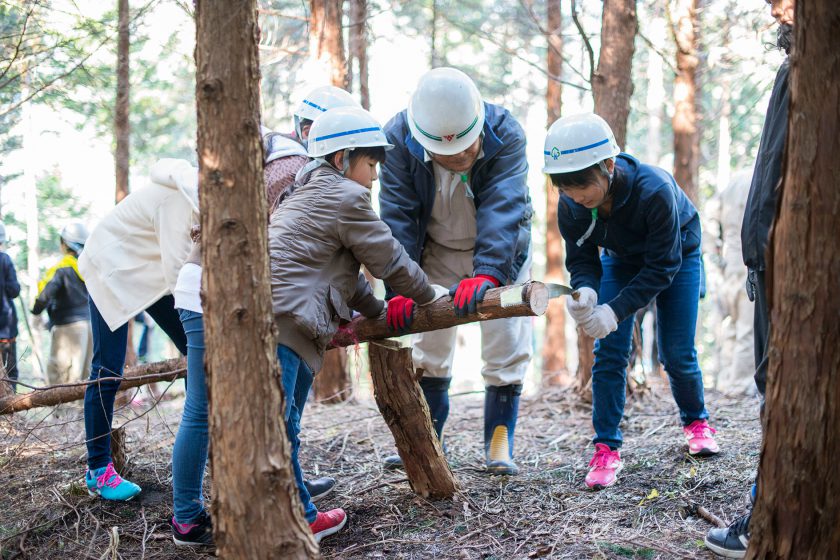 Hadano branches out to support athletes at 2020 Tokyo OlympicsPart 1: Timber from around Japan for the athletes’ village

“Timber!” comes a shout, followed by squeals of excitement as a tree creaks and cracks and finally falls to the ground with a thud.

Guided by teachers and forestry officials, half a dozen children unleash saws from their scabbards and eagerly set about slicing up the bark into discs, which they will take home to use as coasters.

“My arm aches,” says one of the students from Kita Elementary School in Hadano City, Kanagawa Prefecture, as he battles to draw the blade through a hinoki cypress tree. “The fragrance is so good,” says another, triumphantly holding up the fruits of her endeavors.

Some 30 sixth-graders took part in the project Nov. 29, which has been held annually for almost half a century to raise awareness of Hadano’s greatest asset – its forests.

That mission was given a boost in September when wood from the forest was shipped for use in the Tokyo 2020 Olympic and Paralympic Games’ “Operation BATON,” a project using timber from around Japan to build a part of the athletes’ village called the “village plaza,” where shops and cafes for athletes plus the media center will be located.

According to city official Satoshi Hattori, Hadano’s long history of forestries management and its commitment to forestries education and sustainability helped its cause.

“The keyword of the program was ‘sustainability’ and we were keen to push the story behind our timber,” says Hattori, who is in charge of forestries at the city’s environmental symbiosis department.

That story starts centuries ago and the management of the city’s substantial forests. Though located just 60 km west of central Tokyo, Hadano is surrounded by mountains and 53 percent of its 104 sq.-km area is forested.

Since the Edo period (1603–1868), timber from the forests has been used both as building material and to produce charcoal, says Hattori. Fallen leaves were gathered for compost to grow a wide range of produce in the fields below, such as vegetables and leaf tobacco, of which Hadano was one of Japan’s “big three” producers.

These activities continued well into the twentieth century, when afforestation projects included the planting of some 27,000 cedars and cypresses specifically as a “school forest.” The original purpose of this woodland was to provide material for rebuilding schools such as Kita Elementary, which like many schools, temples and other buildings across Japan have traditionally been constructed from wood.

As Japan modernized after World War II, however, Kita Elementary was one of many schools to be knocked down and rebuilt with reinforced concrete, according to school principal Kenichi Hirai.

This marked an era of industrial and economic growth, and Hadano’s agricultural base began to decline markedly. The city’s proximity to Tokyo and Yokohama as well as the introduction of new industries increased Hadano’s population to 167,000 in 2005 – more than three times that of 1950 –  though the number of those involved in forestries and agriculture fell to just 1,866, or 2.4 percent of the workforce.

Hadano officials were already in the process of addressing this issue when the Olympic project was announced, according to Hattori.

In addition to seeking ways to encourage the use of local timber in construction projects, Hadano also looked to up awareness, starting with another of its crucial resources: its children. From 2013, the city began a project to retrofit desks at schools such as Kita Elementary with home-grown slabs of cypress, Hattori says.

This initiative was an extension of the forestries education program that began when the Kita Elementary “school forest” lost its function as a nursery for building materials and was turned into a place of learning.

That patch of woodland high above Hadano is where the children took part in forest “thinning” activities in November, which research has shown reduces tree “overcrowding” to improve natural light and water supply, creating stronger trees.

The project also aims to teach children the important role the forests play in maintaining the vast reserves of natural water that flows into the city, where for centuries more than 20 springs have supplied local residents with thousands of tons of water per day.

“Primarily, we want children to feel the role forests play, and the significance of protecting and nurturing them,” says Hirai, “Connecting Hadano’s wood with the Olympics has shown the children that their activities not only have meaning locally, but on a much wider scale.”

—— Click here for [Part 2] Timber: The roots of Japanese construction is on the verge of “renaissance” 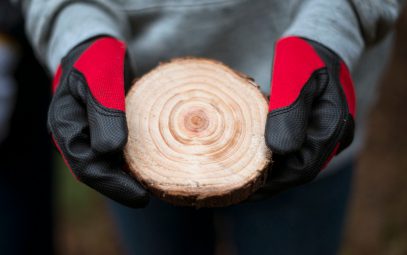 Timber: The roots of Japanese construction is on the verge of “renaissance”