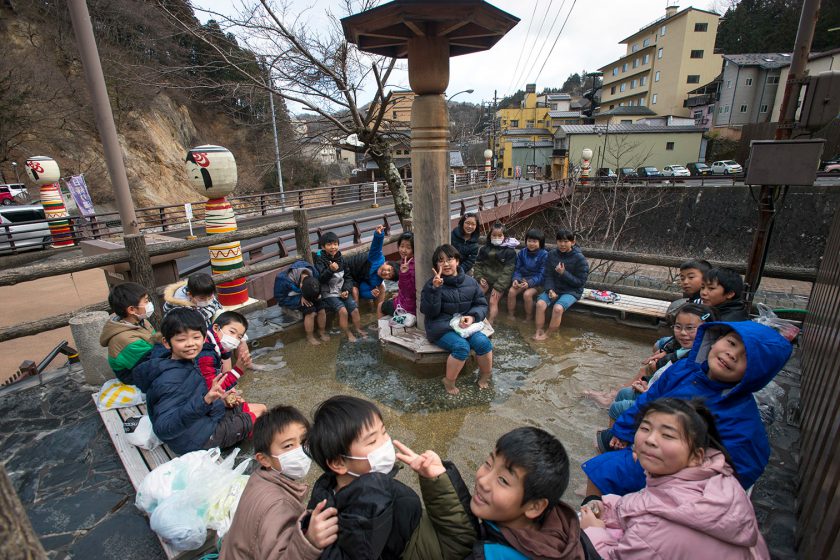 Amid the densely wooded Azuma mountains that back the onsen (hot spring) town of Tsuchiyu lies an unexpected and unique sight.

At the side of an unsealed mountain track, some 700 meters above sea level stands a pair of greenhouses, neither of which houses vegetables, or any other horticultural produce.

Instead, each contains rows of tanks filled with water and hundreds of prawns, which scuttle around below the surface.

Since late 2018, a startup company in Tsuchiyu has been cultivating one of the globe’s biggest and most prized freshwater prawns.

What makes the farm even more remarkable is that while winter temperatures in Tsuchiyu frequently drop below freezing, the variety of prawn found here, commonly known as the giant river prawn, is usually the domain of more tropical climes.

Cultivation is made possible through the creative use of Tsuchiyu’s most abundant resource, its hot springs, which are also employed to give a much-needed energy boost to a part of Japan that has become synonymous with environmental catastrophe.

The initiative was the brainchild of Genki Up Tsuchiyu, a local startup formed in late 2012 in this town 16 km south of Fukushima City. The company’s mission was to revitalize the resort after it was affected by the March 2011 nuclear disaster at the Fukushima No. 1 Nuclear Power Plant, which led to the evacuation of more than 150,000 residents living near the facility.

Furthermore, five of the town’s 16 ryokan (Japanese inn) closed down, says Kato, who is also chairperson of the Tsuchiyu Onsen Town Recovery Council. Household numbers also fell, from 235 in March 2011 to around 165 today.

“Tsuchiyu suffered more than any other hot spring resort because of the nuclear disasters and harmful rumors,” says Kato. “Like many people in Fukushima, I did a one-eighty in my outlook, especially with regards to energy.”

Genki Up Tsuchiyu introduced an initiative to give the town greater energy independence, paving the way for its quirky crustacean project and other revitalization initiatives being developed to coincide with the 2020 Tokyo Olympic Games.

The electricity generated is sold to regional utility Tohoku Electric Power Co., generating annual revenues of ¥1.2 billion, he adds. “Profits are pumped back into the community toward further revitalization projects,” Kato says. “There are no geothermal projects in Japan that have enjoyed this level of success.”

However, its current installed generation capacity is 542,000 kW, or less than 2 percent of the total, relegating it to tenth place in the global rankings.

A major reason for this modest return is that many of Japan’s geothermal hotspots lie within national parks, where development is restricted, says Yutaka Takahashi of the geothermal  projects division at the state-owned agency Japan Oil, Gas and Metals National Corp, (JOGMEC), which endorsed the Tsuchiyu project.

Furthermore, when it comes to tapping into reserves found near hot springs there are often objections from local businesses concerned about the negative impact a plant might have on the quality and quantity of the water supply, he adds.

Takahashi says there is “no known scientific basis” to such arguments, and despite the hurdles, Japan has set out a plan to triple current installed geothermal capacity by 2030.

The installation of the plant at Tsuchiyu, which lies within the Bandai-Asahi National Park, faced further challenges as it is also located within a Fukushima City “urbanization control zone” where development of buildings is prohibited, Genki Up’s Kato explains.

The company was able to circumvent these restrictions by forgoing a structure to house the plant, he says, adding the availability of a pre-existing, unused hot spring well helped nullify potential protests from local onsen owners. “In fact, they welcomed the idea,” Kato says.

It has become a beacon of hope and a blueprint for geothermal advocates, largely because its “binary” system utilizes lower temperature geothermal resources of around 130 C, which are more commonplace than the minimum 200 C hot spring supplies required for “flash” and other geothermal systems.

Furthermore, the re-cycling of the plant’s waste water to cultivate prawns has been heralded a success story that Takahashi terms “a win-win” for the environment and local industry.

Indeed, plant and prawns have stimulated the local tourism industry: Annually, hundreds of visitors, including executives from the energy industry, go to Tsuchiyu to observe the initiatives and in 2018 visitor numbers reached 270,000 – 10,000 more than in 2010.

“Unlike other renewables such as solar and wind, geothermal is a more stable energy source, so it surprises me that Japan doesn’t utilize it more,” said Haruka Ujita, a student at Fukushima University. “Since 2011 there has been so much negativity regarding energy here, so this is a breath of fresh air.”

The town is not stopping there. A five-year plan aims to up annual visitor numbers to 500,000 by 2025 and a new facility where visitors can fish for prawns and sample the crustacean in locally developed products such as prawn ramen is scheduled to open in time for the 2020 Olympics, when Fukushima will host softball and baseball matches.

“We hope to revitalize Tsuchiyu and also position it on the global map as a place of innovation and a contributor to the SDGs (sustainable development goals),” says Kato.