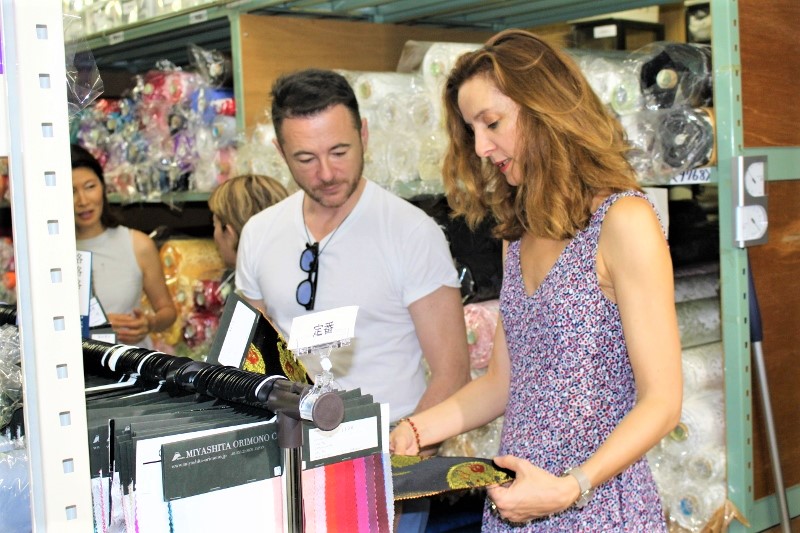 As an Olympic Host Town, Fujiyoshida City has strived to implement a wide range of social, economic and cultural exchanges with the nation of France. One component of the Host Town exchange plan was the promotion of locally produced textiles to a global audience.

This project was planned in conjuction with the August 2018 opening of the “Paris Opera Legends” production in Japan, starring dancers from Paris Opera and other elite international ballet dancers. The plan was devised in close collaboration with Frederic Fontan the artistic director at AlfaLibra, the production’s management company, and Agnes Letestu, former prima ballerina with the Paris Opera, named one of the best dancers of the 20th century, turned costume designer who was enlisted in the creation of costumes using textiles produced in here in Fujiyoshida.

Both Frederic and Agnes joined us in Fujiyoshida in July 2018 to select the fabrics out of samples from 20 different factories, ultimately deciding upon 37 different textiles from 8 different companies. The designs were completed once the two returned to France, drawing inspiration from the selected fabrics and their time spent in Japan at the northern base of Mt. Fuji.

Following the textile selection process, the materials were shipped to France where, following a months-long production process, the completed ballet and haute couture costumes were put on display at the Japonisme 2018 Paris Exhibition “Synergies Between Tradition and Modernity” in February 2019. Later, in August 2019, the highly-anticipated production of “Paris Ballet Legends” opened in Kofu City in Yamanashi Prefecture where awe-struck crowds marveled at the world-class

dancers donning costumes made of traditional Japanese textiles. This was a tremendous opportunity that allowed us to work with members of the French arts and culture industry and add further value to the craft of local textile production and expand its marketability. 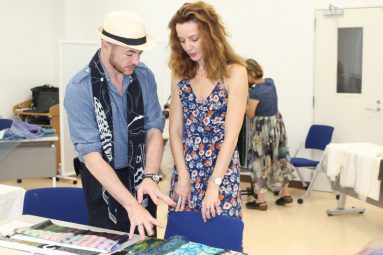 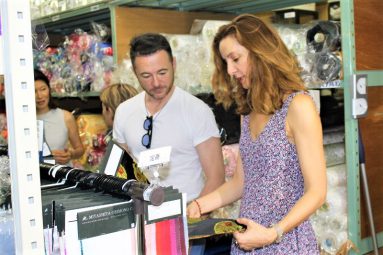 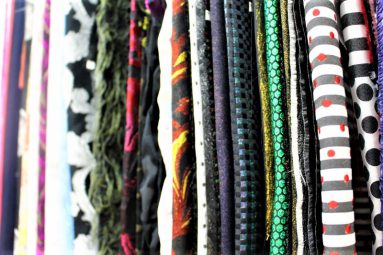 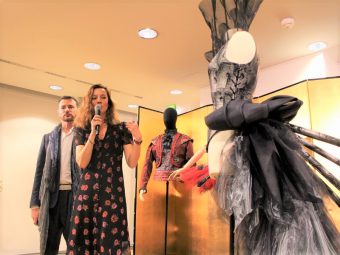 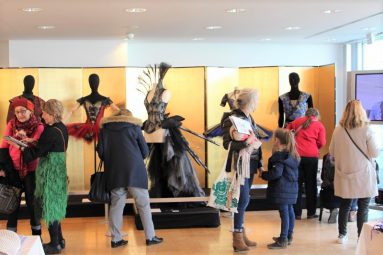 FREDERIC FONTAN is the founder and director of ALFA LIBRA and a dancer himself. He started his company hoping to provide a space for dancers of the Paris Opera to freely create and perform and later expanded this effort by officially launching a cultural affairs department within his company. Since 2016 the company began operations in Hong Kong and began strengthening its presence throughout Asia. In May 2017, the Hong Kong production of “Paris Ballet Legends” featuring star dancers of the Paris Opera Ballet opened to raving reviews, and made its debut in Yamanashi Prefecture, Japan in 2019.

AGNES LETESTU officially retired from the Paris Opera Ballet in 2013 but continues to work as a dancer and designer. In November 2014, “Agnes Letestu – A Shining Star” a documentary film that captured her final two years as a dancer with the Paris Opera was first aired and debuted in Japan in March 2018. She starred in the 2017 Hong Kong production of “Paris Ballet Legends” and served as the company director during the 2019 Yamanashi production.

【The history of locally produced textiles in Fujiyoshida】

Fujiyoshida City boasts a 1000 year history of textile production. Even on a global scale, local production of specialty goods for as long as 1000 years is rare. These textiles were immensely popular during the Edo Period when they were known throughout the country as “gunnaijima” or “kaiki.” Due to foreign competition brought on by the the increasing globalization of the Japanese economy during the 1970’s local production declined rapidly. Though the actual volume of production has decreased, thanks to the dedication and ingenuity of local craftsmen, local textiles produced in this region referred to colloquially as “Gunnai,” maintain a high standard of quality and technique and continue to be used in the products of many world famous luxury brands. The city has gained recognition as one of the most thriving textile production centers in all of Japan.