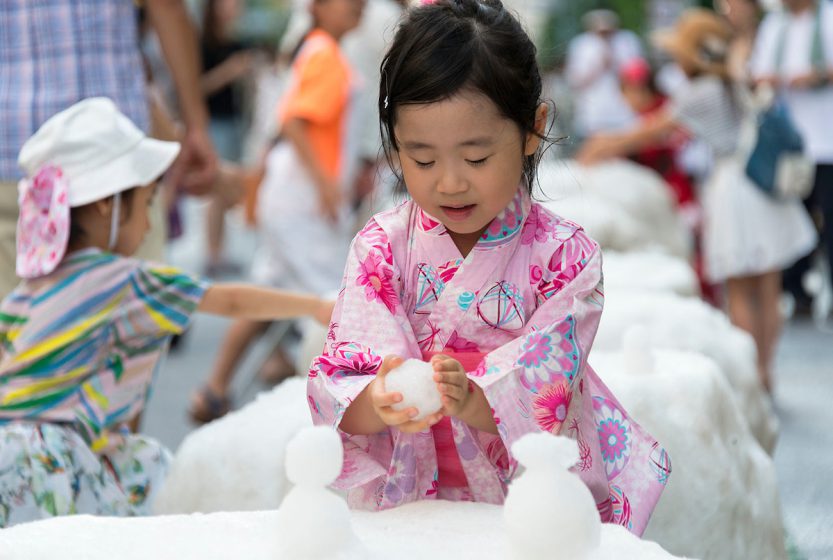 It’s midsummer, and while temperatures in Tokyo are a wilting 35 C, in the capital’s upmarket Ginza district there’s snow on the ground.

Passersby, some holding fans and dressed in yukata – Japan’s traditional summertime kimono – stop to take selfies, while young children seize the opportunity to enjoy a bit of natural chill, even a snowball fight.

“It feels really good,” said one as she grabbed a handful of snow and rubbed it on her forehead and neck.

Further up the road another unusual sight was also causing a stir as shoppers lined up to have their photo taken next to cherry blossoms in full bloom.

“It’s summer, but there’s spring over here, and winter over there,” said Misae Toma as she waited to have her photo taken.

Both snow and sakura (cherry blossom) had been delivered to the capital from Hokkaido, Japan’s northernmost main island, where businesses and municipalities are joining forces to make seasonal spectacles such as snow and sakura a more frequent attraction.

Hokkaido is famed for both, with snowfall in some parts of the island exceeding 1,000 cm during the long winter and hundreds of varieties of sakura luring visitors during hanami (cherry blossom viewing) season, which starts in late April and ends in late May.

In February, members of a public-private consortium gathered hundreds of sakura branches and stored them in a snow-cooled warehouse, uncovering them in late July to take to Tokyo – just in time for them to bloom.

The flowers and snow on display in Ginza were part of a test run to see if they could provide a bit of respite to Tokyoites during the steamy summer, according to consortium leader Fumio Ochi.

“This time we wanted to see if we can actually do it in mid-summer Tokyo, in the hope that next summer we can do it again during the Tokyo Olympics, which will also take place at a similarly hot time of the year,” said Ochi, who is CEO of Hokkaido-based Akarimirai, which specializes in strategies to achieve the sustainable development goals (SDGs), such as introducing energy saving lighting to its clients. “We want to deliver some cool respite for visitors to the Olympics, too, and at the same time say a big Hokkaido ‘Welcome’ using Hokkaido technology.”

Ochi hopes that columns of Hokkaido snow will line the sides of the marathon route which passes through Ginza and that spectators will cheer on athletes holding blooming branches of sakura – Japan’s national flower.

According to Ochi, some 17,900 branches, 100 from each of Hokkaido’s 179 municipalities, are being earmarked for the event, which takes place next year on August 2 for the women’s marathon and August 9 for the men’s.

“We are holding discussions with the Tokyo Olympic organizing committee, though they have already asked – half jokingly – if we can double that for use at the Paralympics as well,” he said, adding it already has been decided that sakura branches will be handed out during the torch relay, which passes through Hokkaido in mid-June, 2020. “We told them it was no problem. We have the technology.”

Indeed, for some years, businesses and researchers in Hokkaido have looked at ways to utilize snow as an alternative energy.

To date they have succeeded in using it as an alternative to air conditioning, employing it to cool facilities such as data storage centers in Hokkaido, as well as an apartment building – the first of its kind worldwide – and retirement homes in Bibai, a city in western Hokkaido. A similar system also cools the uber-cool glass pyramid structure in Moerenuma Park in the island’s capital, Sapporo.

Meanwhile, snow-cooled storage centers in Hokkaido are being used to preserve agricultural products, including vegetables, to slow down the ripening process for richer flavors, while a mango producer in the southeastern town of Otofuke uses snow to create a winter environment in summer to grow mangos, which sell at a premium due to the absence of off-season competition.

Finding alternative uses for Hokkaido’s sizeable snowfall also has been prioritized due to the costs incurred when clearing it. In 2018, Sapporo City set aside more than ¥20 billion (US$189 million) on snow-related countermeasures – an increase of 44 percent over a decade earlier.

The sakura project was first conceived and employed during the 2008 G8 summit at Hokkaido’s Lake Toya. It’s an idea that Ochi believes could lead to an entirely new business culture in Hokkaido, and one that’s kind to the environment.

Each February, sakura trees in Hokkaido are pruned and hundreds of thousands of branches discarded in the process, according to Ochi.

“So, this has nothing to do with destroying nature or the environment, but rather preserving nature that otherwise would have been thrown away,” he says. “Using snow means you can shift time quite easily and create a new culture from Hokkaido’s nature. It’s a win-win idea that anyone can do.”

Passersby in the Ginza area expressed positive views of the project. “Snow is often seen as a nuisance, but doesn’t have to be if it can be used positively like this,” said Yuriko Watanabe, who was visiting Ginza from her home in Yokohama.  “Using it as an energy form that is environmentally friendly is a wonderful idea.”

The sakura also had admirers. “Although it’s a bit weird seeing sakura in the summer, it’s a symbol of Japan so it would be great if they could use this at the Olympics,” said Mika Matsuzaki, adding it seemed serendipitous that the flower will be used during the relay. “The relay torch itself has a sakura motif, so spectators cheering them on holding real sakura seems a perfect match.”