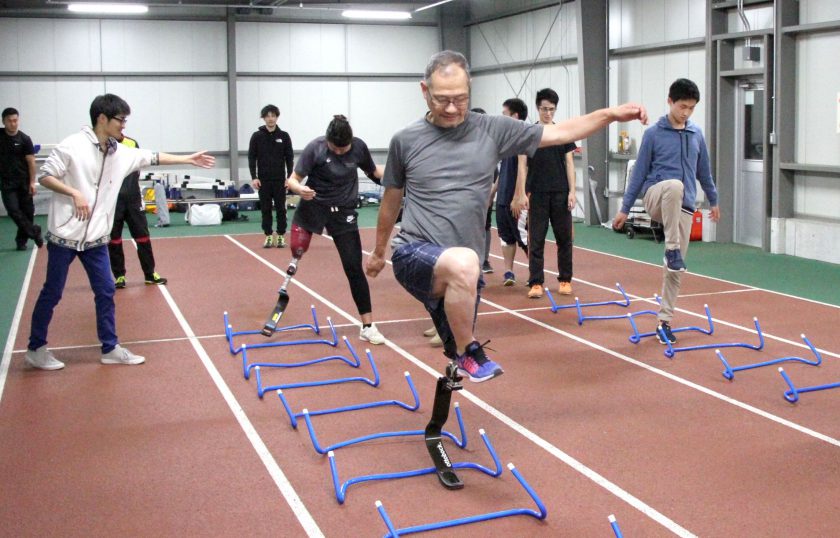 Department of Prosthetics & Orthotics and Assistive Technology of the Niigata University of Health and Welfare (NUHW) in Kita-ku, Niigata City, loans out sport prosthetic legs for an athletics class for people with lower limb disabilities, such as above the knee amputations. Participants made comments such as “Running for the first time in decades brought tears to my eyes,” as they were able to experience running and exercise again after having lost the opportunity. With para sports gaining attention ahead of the 2020 Tokyo Olympic and Paralympic Games, people involved are hoping for wider awareness.

“Try pushing your thigh forward.” Near the end of May, on the Niigata University of Health and Welfare’s indoor track, participants had attached sport prosthetic legs and were exercising with mini hurdle practice. Some games were also included, and 50 meter times recorded.

According to Dr. Takahashi, the prosthetics that people who have had above the knee amputations normally use have no springs, making it difficult to run. However, running prosthetics, which include a leaf spring acting as the foot as well as parts acting as the knee, cost around 800,000 to 1,000,000 yen combined and are not covered by insurance, so most people cannot afford them.

With cooperation from a prosthetics maker, Dr. Takahashi was able to lend out athletic prosthetics for free, allowing people to experience them. Currently, four people regularly attend the monthly class, and have even participated in competitions.

Mr. Kazuo Kobayashi (60), an unemployed resident of Kita-ku, Niigata City who has been a member since NUHW Para TFC began, was able to regain the experience of running which he had lost after his left leg was amputated due to an injury when he was 23 years old. Looking back, he commented, “Although there are  sports clubs for people with disabilities, I have never seen  sport prosthetics before. When I ran for the first time in over 30 years, I remembered the past and cried.”

Mr. Takashi Mori (31), a civil servant living in Nishi-ku, Niigata City, is also a member. “I wanted to exercise, but I did not have the time or knowledge as an individual, and so couldn’t get started. I would like more people who are interested, but haven’t started yet, to learn about this class.”

The class also provides the students helping with it with a valuable opportunity to meet with prosthetics users. Mr. Ren Tsukagoshi (23), a third-year student in the program, commented, “Being able to see users running in competitions and speak with them is a valuable experience.”

Dr. Takahashi, saying, “In the future I would like to make this into a place where children with lower-limb disabilities can try out prosthetic legs, so they can participate in school sports days,” spoke of his goal to make the athletics class into something children can experience as well.

The original Japanese article was carried on NIIGATA NIPPO MORE on June 11, 2019. Foreign Press Center Japan is responsible for the English translation. This article may not be distributed, reproduced, or publicly released without the permission of its copyright holders.