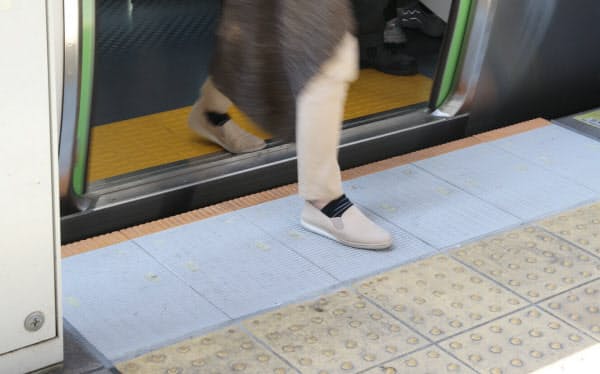 Inclusive society evolving with the Paralympics: Accelerating improvements to trains and hotels

Half a year until the Tokyo Paralympics as of February 25

A society where everyone respects and supports each other, regardless of whether or not they have disabilities. The Paralympics are a major opportunity to create such an inclusive society. Railroad companies and hotels are racing to finish the final touches on their barrier-free improvements, both tangible and intangible. Host towns are also speeding up their preparations.

Mejiro Station (Toshima, Tokyo) on the JR Yamanote Line is located in Bunkyo, which is home to schools such as Gakushuin University. JR East installed materials to minimize the gap between the trains and the platform. The 3.5-centimeter long material, shaped like a comb, was attached to the edge of the platform to help prevent passengers from falling or tripping. It also helps passengers with wheelchairs or strollers, as well as passengers with visual disabilities.

This material has been installed in four stations including Mejiro Station and Otsuka Station, with plans to install it in 32 stations, mainly on the Yamanote and Keihin-Tohoku Lines, by July, before the Olympics start. JR East has stated “We will expand its use (after the Games as well) depending on its usage situation.”

In January, JR East finished switching all the trains on the Yamanote Line over to new E235 series trains. Compared to previous trains, these trains have more open spaces with no seats are installed, making them easier to use for passengers in wheelchairs or with small children.

Using many easy-to-understand signs is also a method for accessibility. Tobu Railway has been installing larger signs than normal for elevators and bathrooms. At Kita-Koshigaya Station (Koshigaya, Saitama), the familiar pictograms of men and women indicating bathrooms are 170 centimeters tall, displayed in full human size. With this improved visibility, the station is ready for use by a variety of passengers.

Hotels have also been hurrying to prepare for guests with disabilities. The Imperial Hotel (Chiyoda, Tokyo) has been working on increasing the number of slopes and handrails in and around the hotel. Currently, the hotel has one room with extra barrier-free measures, and plans to increase that number up to ten by the end of March.

In addition to physical improvements, barrier-free customer service is also important. The Imperial Hotel holds regular caregiving seminars for its staff, which have had over 700 participants so far. The hotel has also held workshops in which participants put on devices that restrict their movement in order to understand how seniors feel. The hotel has ensured that staff can immediately answer questions such as “What floors are the accessible washrooms located on?”

Regarding hotels, there were significant concerns over the lack of rooms accommodating guests using wheelchairs in Tokyo as a whole. In September 2019, the Tokyo Metropolitan Government implemented a bylaw calling for standard hotel rooms to implement barrier-free measures such as ensuring entrances are sufficiently wide.

The bylaw regulates standards such as “entrances to guest rooms must be at least 80 centimeters wide” and “rooms must not have steps inside,” and applies to renovations and new construction of hotels over a certain size. Tokyo Governor Yuriko Koike emphasized, “This will create a better accommodation environment which more people can use, not only people with disabilities but seniors as well.”

One key to an inclusive society is making towns barrier free, including public facilities, stations, and roads.

Unique projects include using a corporate version of the Hometown Tax system to create 15 training camp facilities accessible to wheelchairs using mobile homes (Tagawa, Fukuoka), and renewing signs and renovating steps and tactile blocks for people with visual disabilities along the routes between Baji Koen and the closest five stations (Setagaya, Tokyo).

However, even more important than infrastructure improvements such as these is to expand the barrier-free mentality of naturally considering the needs of people with disabilities and providing them with support.

As students will play a central role in creating an inclusive society in the future, there are hopes that these efforts by youth will encourage adults to change their way of thinking as well.

The original Japanese article was carried on The Nikkei on February 24, 2020. Foreign Press Center Japan is responsible for the English translation. This article may not be distributed, reproduced, or publicly released without the permission of its copyright holders.