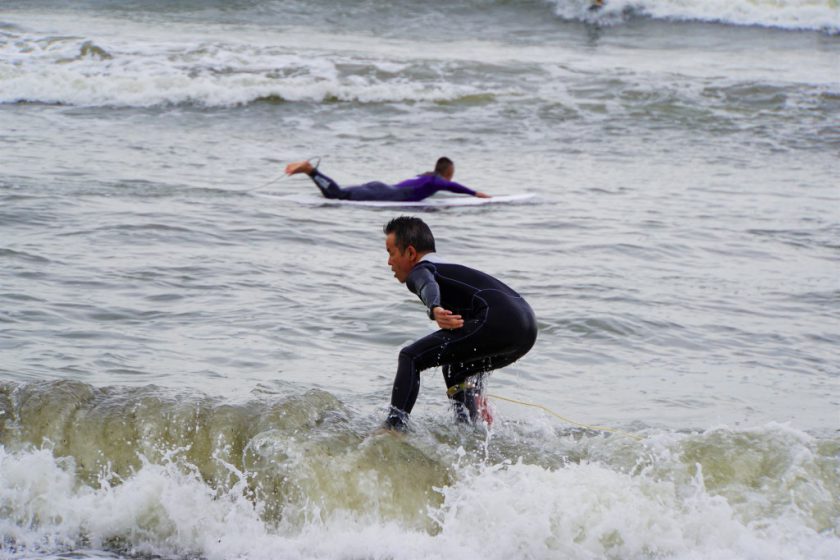 Ichinomiya Town, Chiba is located about 70 kilometers from central Tokyo, on the Pacific coast, and 600,000 surfers visit there every year for its quality waves. The waves along Tsurigasaki Beach in particular are said to be world class, and it has been chosen as the venue for surfing, which will be an official event for the first time in the 2020 Tokyo Olympics.

With a population of 12,450, many families moved to this town with bountiful nature for the sake of surfing. As a “Town that lives with surfing” (Japanese-only website), the town as a whole has worked to clean up the beaches. After being chosen as an Olympic venue, the town has put even more effort into environmental education, and in 2018, they were the first group in Japan to respond to a call by the International Olympic Committee to participate in the UN’s Clean Seas campaign to reduce marine pollution from plastic waste. As part of their efforts, the town arranged a lecture for the junior high school students of the town by a leading researcher in plastic pollution.

In mid-July, 2019, just before summer vacation, the 94 first-year students (12 to 13 year olds) of Ichinomiya Junior High School listened intently to Professor Hideshige Takada of the Tokyo University of Agriculture and Technology. Professor Takada is known for being one of the first in the world to study the effects on the oceans of microplastics with diameters of less than 5 millimeters.

Professor Takada explained how pollution spreads, using the example of a plastic bag thrown away on the street being carried to a river by the rain, and from the river to the ocean. According to the professor, plastic waste in the oceans is broken down into fine particles by ultraviolet light and the movement of waves, becoming microplastics which are difficult to collect due to their size. There are said to be over 50 trillion pieces of plastic waste in the world’s oceans, and there are fears that while in the ocean they could absorb harmful chemicals from the water, or release their own harmful components into the water. Professor Takada showed a picture of a fish which had been found to have microplastics in its body, noting that as other fish and birds eat fish with microplastics in their system, microplastics will spread throughout the ecosystem along the food chain, mentioning concerns about the safety of fish eaten by people.

According to the professor, Japan uses 22.7 billion plastic bottles a year, and although there is a high retrieval rate of 88.8%, the remaining 2.5 billion are not collected, and are one of the causes of marine plastic waste. He explained, “Even more important than recycling is reducing the amount of single-use plastics. You can help by carrying around your own bag and water bottle. This will help protect the oceans and everyone’s health.”

One of the students who listened to the lecture, Ms. Toko Odaka, said, “I had heard of marine plastics before, but I did not know what effects they had. I was surprised to hear they don’t just affect the oceans, but human health as well. I would like to think about what we can do to help.”

Using the Olympics as an opportunity to teach children

Ichinomiya’s mayor, Mr. Masaya Mabuchi, organized this lecture, and explained, “I would like the children to realize that mass production and mass consumption is damaging our environment, and to be aware that all our actions have some effect on the environment.” According to the mayor, a third-year junior high school student has suggested picking up any litter found between the town and the beach in preparation for the Olympics. He also commented, “As the Olympics grow closer, the children are also beginning to have a sense of involvement. It seems they have started to want to show hospitality to the people who will visit…. I would be happy if when they grow up, they remember the things they learned through the Olympics and Paralympics.”

Working as a town to clean the beaches, showing gratitude to the ocean

Ichinomiya was already carrying out various environmental conservation activities. The town has provided households with mesh garbage bags made from recycled plastic bottle fibers with the goal of improving the water quality of the river, and held events such as the Cleanup Walking Competition, where families and friends made teams to clean the beaches. In addition to the municipal government, there are also nine groups, including local residents, university students, and companies, that volunteer to periodically tidy the beaches.

In 2015, an alliance of the heads of Japanese local governments in areas where surfing is popular was formed in response to a call by Ichinomiya, and they started a campaign to promote the adoption of surfing as an event in the 2020 Olympics. As part of this campaign, a 10,000-Person Beach Cleaning Event was held, with beach cleaning carried out by residents of 29 municipalities throughout the country. This will be the first time for surfing to be an official Olympic event, and these activities may have helped.

A local woman surfer (50) who participated in cleaning the beach and has been coming to surf at Ichinomiya for nearly ten years, commented, “I participated in the beach cleaning out of a sense of gratitude and respect for the ocean, as it always lets me enjoy it. I think a lot of other surfers feel the same when they help clean.”