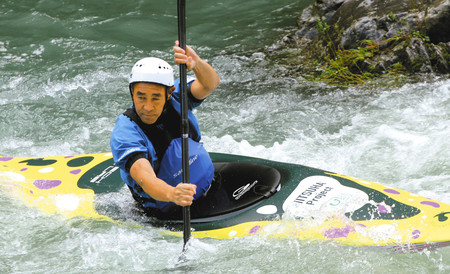 The desire to see a made-in-Japan canoe racing in the 2020 Tokyo Olympics. Members including an SME in Tokyo that has never made canoes before are working to develop the first made-in-Japan canoe to compete in the Games. The passion of a young canoer has become a driving force behind this project.

“I want to make a canoe the right size for Japanese people.” This has been the dream of Mr. Shinnosuke Go (29) of Techlab (Tama, Tokyo), which is handling the manufacturing of the canoe body and seat, for many years. He began canoeing in elementary school, and is an instructor for a canoe club in Chiba Prefecture.

Most racing canoes are made by countries in Eastern Europe which are strong competitors in canoeing events, and the canoes are designed for large Western bodies. They are difficult for comparatively small Japanese people to handle, and even top athletes have no choice but to modify a foreign-made canoe.

Mr. Go worked at a steel company, but could not give up on his dream of building a canoe and left that job. In the summer of 2016, he contacted Techlab, which he had found online.

A small company of around 15 which manufactures products such as prototypes for racing car parts, their work involves carbon fiber, the same material used to make canoes. Mr. Go was certain he had the skills necessary to be involved in all parts of the process, from design to manufacturing, and brought his own canoe to the interview to demonstrate his passion. Techlab’s president, Mr. Masaru Shiraishi, hired him, saying, “An interesting guy with ambition has come.”

After joining the company, Mr. Go continued his research, buying the latest foreign-made canoes with his own money and learning from the other senior staff at the company. Having felt there was a limit to what they could do alone, at the end of 2016 he contacted the made-in-Japan canoe project organized by Toyo University (Bunkyo Ward, Tokyo) and other partners. Promoting the capabilities of Techlab, he joined the team.

The prototype canoe unveiled in October last year in Tokyo was made by Techlab. Mr. Go may be a rookie as a technician, but as a competitive canoer he actively provided advice on the form and other aspects.

However, development is still not complete. It is unknown whether the canoe will be used in the Olympics in a year and a half. Mr. Go is forward-looking, declaring, “This is a big step forward for the Japanese canoe industry.”

◆Canoe for competitive use to be made this summer

The first project to develop a made-in-Japan racing canoe began in May 2016, when Toyo University and Tokyo Higashi Shinkin Bank (Sumida Ward) signed an agreement. In addition to Techlab, members include KARA-FULL (Taito Ward), working on the design of the exterior; YMG1 (Sumida Ward), in charge of the wrap design; and Leading Company (Kita Ward), developing gear for the athletes to wear.

The canoe under development is for slalom racing, where competitors must pass through gates. Referring to a water deity mentioned in the Kojiki (the oldest extant chronicle in Japan), the canoe has been named MITSUHA.

The prototype revealed in October last year was the third generation. The stern of the canoe has been made to capture water and increase resistance, to provide more push to the canoe’s body. Unlike the foreign-made canoes which focus on minimizing resistance, the Mitsuha’s design allows for different levels of resistance in different situations.

Professor Osamu Mochizuki, head of research and development, explained, “Instead of controlling nature, we are using the power of nature as it is.” He emphasized, “We cannot surpass the rest of the world just by copying them. I am interested in observing animals, and seeing how their capabilities can be applied. The goal is victory with a new canoe made from zero.” Plans are to begin manufacturing a canoe for competitive use this summer. Donations are being accepted through the Mitsuha homepage.

In the 2016 Rio de Janeiro Olympics, Japan won its first bronze in canoe slalom. According to the project team, some of the top canoers in Japan, potential Olympians, have shown interest in the Mitsuha.

Mr. Tsuyoshi Fujino, chief director of the Tokyo Canoe Association, which tested the Mitsuha and provided advice, gave his approval: “It has good acceleration. If some minor issues are cleared, it will make a fine boat.”

The original Japanese article was carried on TOKYO Web on January 7, 2019. Foreign Press Center Japan is responsible for the English translation. This article may not be distributed, reproduced, or publicly released without the permission of its copyright holders.