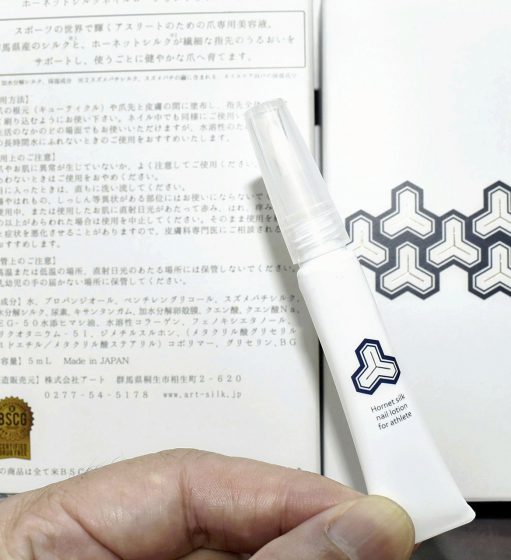 Nail protector lotion for athletes. Plans exist to sell it ahead of the Tokyo Games (Photo: THE YOMIURI SHIMBUN)

A company in the city of Kiryu, known for its silk textiles, has developed a lotion to protect athletes’ nails, using ingredients including proteins extracted from silkworm cocoons. In many sports, including ball sports, martial arts, and athletics, an athlete’s nails are important tools. Broken and damaged nails can worsen the overall condition of the athlete. The protective lotion passed US doping tests in March this year. With the Tokyo Olympic and Paralympic Games coming up next year, the company plans to begin sales this fall.

This product was developed by Art Co., Ltd., a dyeing company established in 1982. Using the silk protein sericin, which has moisturizing properties, they are also manufacturing soap and cosmetics.

Research into the nail protector lotion began in 2016. Company president Mr. Hisao Ito (77), having repeatedly seen professional baseball players have to be substituted due to split fingernails, thought, “Instead of relying on taping, would it be possible to strengthen and protect the nails themselves instead?”

The development also used patented technology from the National Agriculture and Food Research Organization (NARO). Combining a protein made from the cocoons of hornets with sericin, the composition is almost the same as that of human nails, and with a strong spiral structure it is expected to be effective in preventing split nails. It was first sold to the general public in the fall of 2017, as Hornet Silk Nail Lotion (2600 yen, tax excluded). In addition to being sold in Gunma, the lotion was sold at Tokyu Hands in Tokyo.

To make a product for athletes, a component extracted from chicken eggshell membrane was added so the lotion would have an effect more quickly. The proteins from eggshells help form stronger bonds, and after testing for several months with prototypes, effectiveness was confirmed. Next, Art Co. plans to provide samples to Olympic sports associations, and have them test using the lotion. The company is also in talks with a major sporting goods manufacturer about releasing the product on the market, considering providing three months’ worth of the lotion for around 10,000 yen.

Mr. Ito commented, “There must be many athletes out there concerned about nail damage. I would like to provide backup to their efforts in the Games through this product using technology from Kiryu.”

The original Japanese article was carried on THE YOMIURI SHIMBUN on July 26, 2019. Foreign Press Center Japan is responsible for the English translation. This article may not be distributed, reproduced, or publicly released without the permission of its copyright holders.