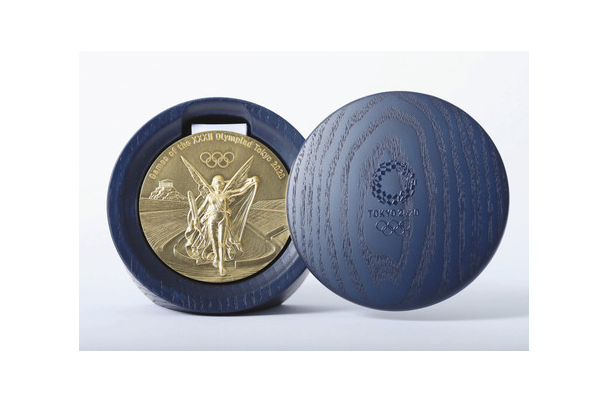 Condensing Japan’s culture and technology into the medal case design for the Olympics and Paralympics: Mr. Shinya Yoshida, living in Yachiyo City, Chiba

“I condensed Japan’s culture and technology.” The medal case holding the gold, silver, and bronze medals for the 2020 Tokyo Olympic and Paralympic Games. Mr. Shinya Yoshida (35), a product designer living in Yachiyo who designed the medal case, spoke about his feelings behind the design. Olympic medal cases tend not to receive any attention, but this time the case is of such quality that it has become a topic of discussion. Smiling, Mr. Yoshida commented, “It is a refined case that could only be made in Japan.”

The medal cases designed by Mr. Yoshida and made by furniture manufacturer Yamagami Mokko (Tsubetsu Town, Hokkaido) are 12 cm in diameter with a height of 6 cm. Using tamo ash wood from Hokkaido, they weigh a little over 350 grams. The wood grain is clearly visible with the indigo color of the cases, and there is a depression at the bottom where the ribbon can be stored below the medal.

Both the case and its lid have four magnets built in, so the case can be closed magnetically. Another unique feature is that the bottom of the case is cut so that it can be used as a standing frame to display the medal without having to remove the medal.

After having moved around frequently due to his father’s work, Mr. Yoshida has lived in Yachiyo since he was in the third year of elementary school. Saying, “I liked using my hands ever since I was a child,” he began working at a local factory as an automobile mechanic after graduating from high school. He became interested in designing car parts, and quit his job at the age of 23. He went to vocational school to study design, and in 2012 opened an office out of his home.

He began doing business with Yamagami Mokko, known for its technical skills, and became friendly with the managing director of the company, who was the same age as him. The Tokyo Organising Committee of the Olympic and Paralympic Games announced a public bid for manufacturing the medal cases last fall, and the two applied, with the design and high level of technique winning them the bid.

Artisans at Yamagami Mokko use brushes to apply undercoating to the case by hand, followed by a urethane coating. They will be making a total of 540 cases by hand for the Olympics and Paralympics. Explaining why he chose a deep indigo color, Mr. Yoshida said, “Indigo has long been a familiar color to Japanese people, as can be seen with indigo dye. I made it a dark shade to help the medal stand out.”

“Encounters with many different people led to this medal case. I hope to contribute to the community in the future through design and craftsmanship,” Mr. Yoshida said happily. He is looking forward to the beginning of the games, and hopes athletes who medal in the games will promote the cases by bringing them back to their home country, or by showing them on social networking services.

Mr. Yoshida visited the Yachiyo City Hall on September 18, presenting the medal case he designed to Mayor Tomonori Hattori. The mayor comment, “If, along with this case, one of the city’s residents became a medalist, nothing would make me happier.”

The original Japanese article was carried on TOKYO Web on October 5, 2019. Foreign Press Center Japan is responsible for the English translation. This article may not be distributed, reproduced, or publicly released without the permission of its copyright holders.