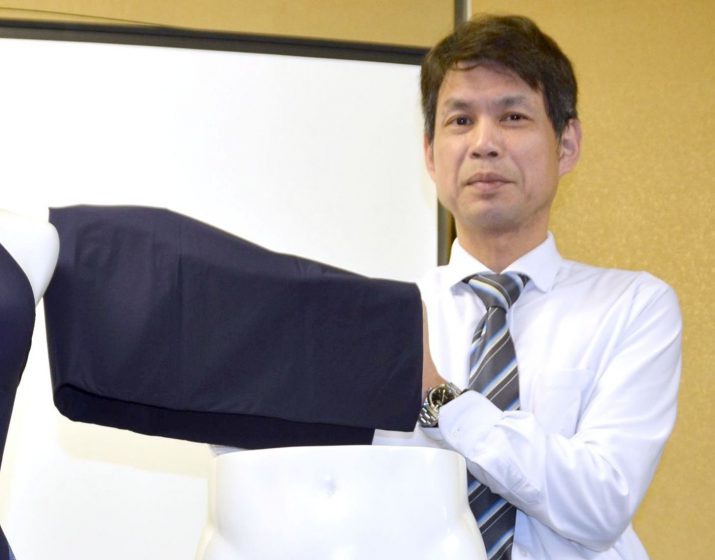 For the Mizuno competitive swimsuits which will be used during the Tokyo 2020 Games, water-repellent fabric developed by Niigata Senko (based in Gosen) will be used. Its key features are high water repellency and elasticity. Mizuno has contracts with many of Team Japan’s athletes, such as Yui Ohashi, who won bronze in the women’s 400 m individual medley during the 2019 World Aquatics Championships, and local Niigata techniques will be supporting their efforts to win medals at the Games.

In competitive swimming, limiting water resistance is the key to winning and breaking records, and the functions of swimsuits are an important factor. Even after body-length swimsuits were banned in 2010, manufacturers have continued developing new fabrics to improve swimsuits’ capabilities.

Niigata Senko, using techniques honed in making sports materials used in uniforms and exercise wear, jointly developed a fabric with high water repellency and elasticity together with major textile manufacturer Toray Industries. This fabric was provided to various manufactures starting around the 2012 London Olympics. To prepare for the Tokyo Olympics, since the previous Rio Olympics research has continued to further improve quality.

With the new fabric, elasticity can be modified by carefully regulating the temperature used when washing the original fabric. Water repellency was increased using techniques to ensure chemicals cover each individual fiber. As a result, the water retention rate was decreased to 25–30%, around half the level it was during the Rio Olympics.

The Olympic athletes for swimming will be decided at the Japan National Swimming Championships in April. In addition to Ohashi, Mizuno has contracts with other top athletes such as Ippei Watanabe, former world record holder for the 200 m breaststroke, and Masato Sakai, silver medalist in the 200 m butterfly at the Rio Olympics. As Mizuno is one of the major competitive swimwear brands, it is expected that a number of athletes will wear the new swimsuit. Rikako Ikee, who was diagnosed with leukemia, also was planning to wear the new swimsuit if she qualified for the Olympics.

Niigata Senko President Noriyuki Kanazuka commented, “I am happy that techniques based on Gosen’s traditional textiles could make a contribution. I hope Japan’s athletes will make a good showing wearing the swimsuits created using these techniques.”

The original Japanese article was carried on NIIGATA NIPPO MORE on January 21, 2020. Foreign Press Center Japan is responsible for the English translation. This article may not be distributed, reproduced, or publicly released without the permission of its copyright holders.