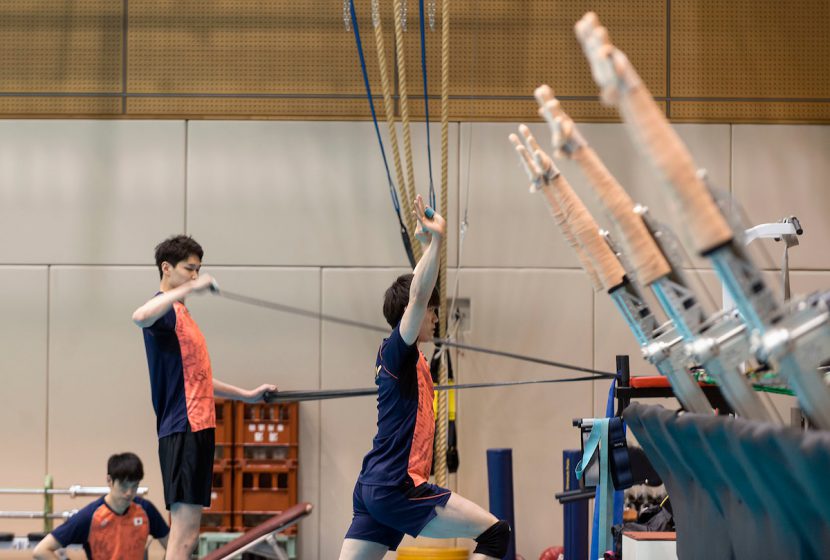 A set of hands shoots up faster than schoolchildren keen to impress their teacher. But instead of a classroom, we’re inside Japan’s National Training Center in Tokyo, and the raised arms belong not to bright-eyed kids, but a multi-limbed robot that’s lending a hand training Japan’s volleyball players.

The “block machine” robot was designed to assume the role of opposing players whose role is to “block” an attacking shot, or “spike” in volleyball lingo.

Controlled via tablet computer, the robot’s arms whizz across a rail positioned at the net and spring into the desired position with a reaction time of 1.1 seconds – faster than its human counterparts.

Its aim was to give the national women’s volleyball team a leg up following bronze medal success during the 2012 London Olympics, said Hiroo Iwata, lead researcher on the block machine and a professor at Tsukuba University in Ibaraki Prefecture.

“The Japan Sports Agency (JSA) has an initiative aiming to bolster sports deemed likely to win medals at future Olympics,” explains Iwata. “Bronze at the 2012 Olympics made the women’s volleyball team a medal candidate for future Games. The block machine idea was conceived as a way for female players, who are smaller than their counterparts around the globe, to get regular practice against taller opposition.”

The initial concept came from then women’s coach, Masayoshi Manabe, who saw a robotic soccer goalkeeper used in a popular TV show and wondered if it could be adapted for volleyball, says Iwata, 62.

Compared to the keeper bot, which had limited mobility range, the contraption Manabe envisioned was far more complex, says Iwata. His institution, however, was well equipped to give it a go, featuring the biggest sports department among Japan’s national universities.

In fact, it was not the only JSA project being developed at Tsukuba University, which had been charged with directing the overall technical development side of the JSA’s Olympiad-strengthening initiative.

“Altogether we were developing over 60 projects in a wide variety of events, including advanced running shoes and bicycle race pedals,” he says.

With the block machine being a robot, development was assigned to Iwata, who in addition to being head of Tsukuba’s Information and Systems Division of Intelligent Interaction Technologies, has a background in mechanical engineering, not to mention a keen interest in volleyball, which he has played and coached.

A concern when he started development in 2013 was that there was no suitable precedent to guide him.

“Just to get a robot to walk is tough, but to create a robot that can block a ball like a world-class athlete with the stipulated 95%-plus degree of reliability – technologically, that’s an extremely difficult proposition,” he says.

“As a lab-based research project, you can create a pretty high-performance device. But to create something that can be used in an actual training situation and can be operated not by researchers, but coaches and players is a different proposition.”

To overcome some of the more elementary hurdles Iwata turned to existing technology developed at Tsukuba, such as the ultra-powerful actuators on an 8-meter-high robot developed at the university. To improve speed and robustness, most parts are made from an aluminium that’s basically aircraft-grade, Iwata said.

The result was a 9-meter-wide contraption complete with three sets of arms that can move rapidly across the full length of the device, extending up to 3.2 meters in height.

With four “degrees of freedom,” or rotational “joints,” it can also simulate a variety of limb angles. Each set of arms is also able to move independently and at differing heights. Its mechanical base, plus advanced programming, allow it to move not just rapidly, but smoothly, too.

Basic movement patterns are augmented by a huge data base collated by analysts from actual game situations. This enables an infinite number of block scenarios that can be set and controlled by coaches at the touch of a tablet screen.

The robot’s success led to the JVA requesting modifications to simulate even taller players so the men’s team could use it as well, though Iwata says expanding the robot’s “working volume” – in this case increasing the height by over 40 cm – presented a huge challenge.

But it has paid off, for members of both women’s and men’s teams, says national men’s team analyst Kenji Itoh.

“The main reason for using this is so that when players encounter much taller opponents … they are not fazed,” explains Itoh during a training session at the National Training Center. “Thanks to the block machine, that fear has gone.”

Itoh hopes that in the future the block machine will become fully automated, fascilitating a more realistic game environment.

In fact, Iwata has conducted research into such a capability, using computer cameras to enable the arms to track the ball’s exact position. While this is manageable in a controlled environment, Iwata says background “noise” at the National Training Center, such as training apparatus and even the athletes’ clothing, makes it difficult for the cameras to accurately track the ball.

“The current block machine is suited to repetitive training, but to make it react instantaneously to more fluid game-like situations requires the robot to be fully automatic, which we continue to research,” he says.