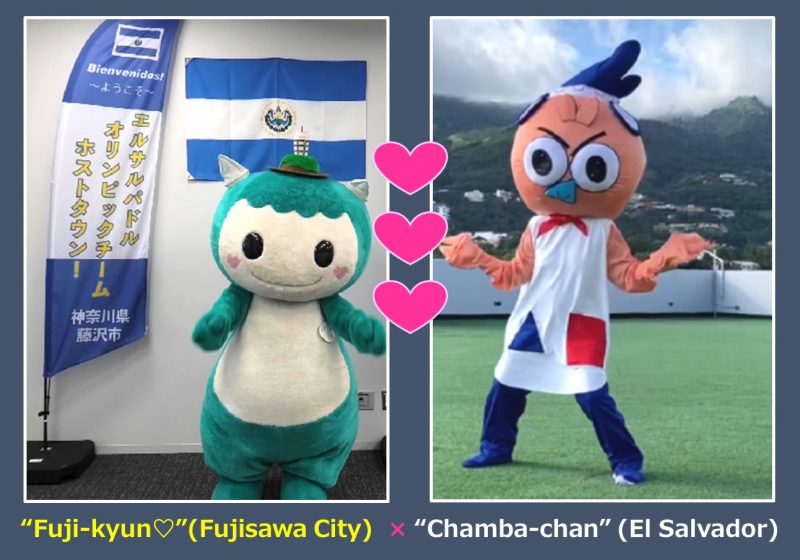 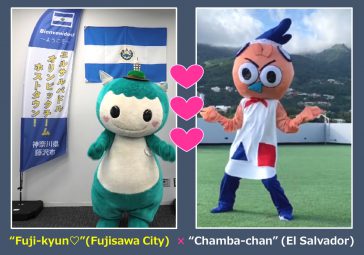 In the summer of 2021, Fujisawa City, together with Kanagawa Prefecture, will be hosting the pre-Games training camp of the delegation of El Salvador. Fujisawa, which is also a Host Town for the Salvadorian delegation, has been promoting various feasible exchanges under the Covid-19 restrictions, such as exchanging message videos. In addition to such efforts, Fujisawa City and the Embassy of Japan in El Salvador have created videos in which ‘yuru-chara’ mascots from both countries dance along with their theme songs.

So, what are ‘yuru-charas’, anyway? For those who haven’t heard of ‘yuru-charas’, let us briefly explain what they are. Many of the municipalities in Japan have their own ‘yuru-charas’ as mascots to promote tourism or local products. The Japanese term ‘yuru’ meaning relaxed or casual, and ‘chara’ as an abbreviation of character are used to call the friendly mascots in general, often with motifs that represent local culture, history or produce. There are a considerable number of ‘yuru-charas’ throughout Japan, and they are so popular among the Japanese people, that even events in which mascots of respective municipalities etc. compete exist.

The Embassy of Japan in El Salvador has a mascot called ‘Chamba-chan’, which was created with the desire to raise the Salvadorians’ awareness and intimacy toward Japan through the unique Japanese ‘yuru-chara’ culture. ‘Chamba-chan’, inspired by an imaginary bird that appears in the team song of the Salvadorian national football team, was designed by a Salvadorian exchange student who studies design in Japan, and have fascinated many Salvadorian children and adults whenever appearing at the embassy’s promotional events.

On the other hand, Fujisawa City, which serves as the Host Town for El Salvador, has an official mascot called ‘Fuji-kyun♡’. The design was chosen by citizens’ voting from among the nationwide public entries, characterized by a hat featuring ‘Sea Candle’, an observatory light house on the city’s best-known touristy island Enoshima, and yacht-motif ears.

Today, we are releasing two dance collaboration videos featuring Chamba-chan and Fuji-kyun, sprung from a suggestion by an Embassy official in El Salvador. He hoped that the videos would attract the dance-loving Salvadorians at home under the COVID-19 restrictions, while promoting awareness of the friendship between Japan and El Salvador in celebrating their 85th anniversary of the diplomatic ties, and also of Fujisawa City as the Host Town for El Salvador.

In the video created by Fujisawa, the two yuru-charas joyously dance to the city’s theme song, ‘Kyun to Saseru Kono Machi de (In this Heart-Throbbing City)’, with sceneries of the four seasons in Fujisawa and dioramas showcasing the annual events in Japan in the background. It was created to introduce the charm of the Host Town Fujisawa to the people of El Salvador, with the desire to further promote friendship between the two countries, and wishes for the success of the pre-Games training camp and the Tokyo 2020 Games next summer. 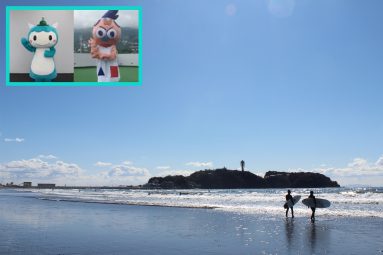 Surfers in the Summer Time near Enoshima ©Fujisawa City 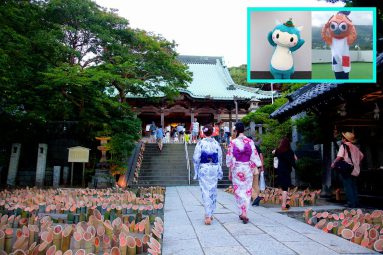 As for the video created by the Embassy of Japan in El Salvador, the song ‘Kizuna (the Bonds)’ was written in Japanese and Spanish by Melodic Rain, a music group consisting of students and a graduate of University of El Salvador who study Japanese, with the theme of friendship between the two countries. The song in which Chamba-chan and Fuji-kyun♡ dance together was choreographed with some movements of the Japanese sign language, targeting all age groups with its simple and jolly movements. 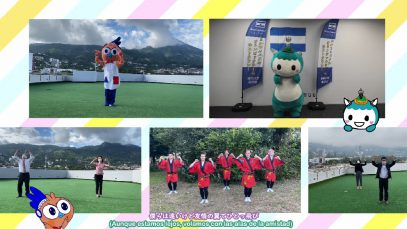 The two dance videos were delivered by the Embassy of Japan in El Salvador during ‘the On-Line Japanese Culture Month’ held in November, as part of their effort to introduce various charms of Japan.

Today, Fujisawa City is simultaneously publicizing the two videos, along with an interview video from the members of Melodic Rain, the music group of Salvadorian university students who wrote the song, ‘Kizuna’. Partly in fluent Japanese, they talk about their love for Japan, and thoughts for the Tokyo 2020 Games next summer.
Please do watch and dance along with them.

Fujisawa City is located approximately 50km southwest of Tokyo facing the Pacific Ocean and possesses both rich natural environment and convenient urban functions. Being the largest city with the population of about 430 thousand in the central part of the famed ‘Shonan’ area, Fujisawa also boasts Enoshima on its southern end, one of the most popular domestic tourist destinations, and the sailing venue for the Tokyo 2020 Olympic Games.
Besides being the Host Venue, Fujisawa will serve as ‘the pre-Games training camp venue’ and ‘the Host Town’ for three countries including El Salvador, and will welcome delegations of various sports with hospitality.